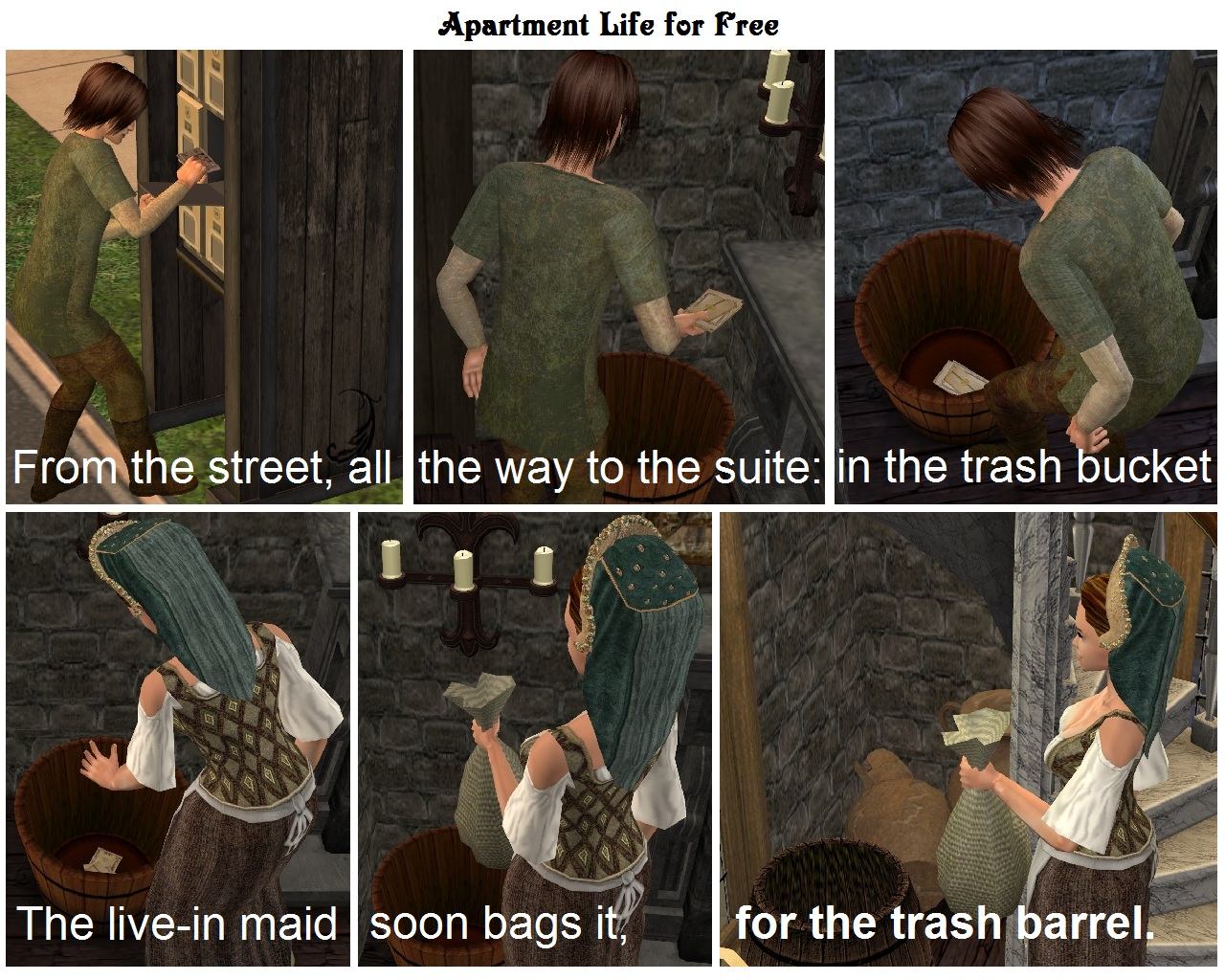 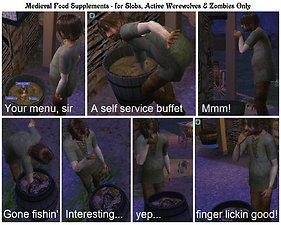 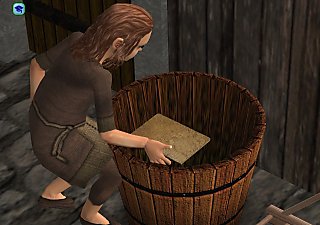 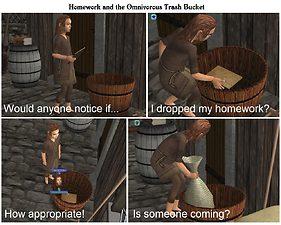 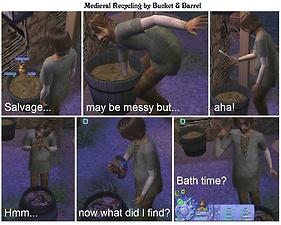 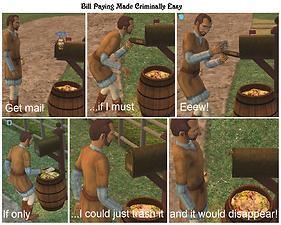 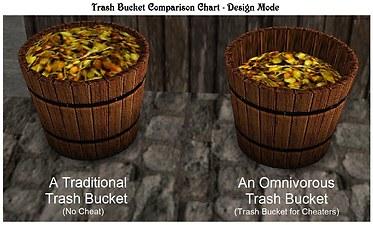 Advertisement:
548 Thanks  Thanks     65 Favourited
This is a new mesh, and means that it's a brand new self contained object that usually does not require a specific Expansion pack (although this is possible depending on the type). It may have Recolours hosted on MTS - check below the description for more information.

Ye Olde Cooper wast prevailed upon by outlawes to maketh a cunning set of barrels bye which ye lordes and masters would be depriveth of their rightful due. This Upgrade supplies the following enhancements:

1) The barrel surface texture has been cleaned up, particularly to eliminate the horizontal line that showed in the centre of the Trash Barrel.

2) The interior mesh resolution for the Trash Barrel and Trash Bucket has been doubled so that they are more circular.

3) The interor texture mapping has been remapped to increase the resolution.

4) The mesh resolution in neighbourhood view has been moderately increased so that both the barrel and bucket appear circular rather than hexagonal.

5) While both objects still default to trashing everything, a new menu can selectively accept only bills and/or only homework as trash.

6) The Trash Bucket is now placeable and usable under counters.

7) As before, Sims and animals attempting to overturn the Trash Barrel will be unsuccessful, but the attempt no longer results in an error.

8) In spite of these improvements both objects now have a smaller filesize.

To provide a Trash Barrel and Trash Bucket that Sims will use to autonomously destroy bills, homework, and university assignments. The cheater's Trash Barrel provides an alternative master object for all the components of Ye Olde Cooper series, but it does not conflict with the original. These barrels can use any of the barrel surface and contents recolours distributed with that set. These two barrels have the following features: they may be placed on locked tiles and beach tiles, are non-flammable, may be struck by lighting, cannot be stolen, neighbourhood viewable even in basegame, and they remain in place if the lot is sold. The barrels are conventional trash receptacles, as well as containing a slot which acts as a desk surface - in fact they actually fulfill a Sims want to have a desk.

If one of these cheater's barrels is the closest surface to the road, Sims will autonomously place bills and/or homework in the barrel. In the case of the Rogue's Trash Barrel, the bill, homework or other object placed in it will quickly fade into non-existence. In contrast, the Omnivorous Trash Bucket will contain the deposited object until the bucket is emptied. If desired, the default cheat mode can be reconfigured from the "Change Mode" menu so that only normal trash or only bills and/or homework will be trashed.

Caution: in the "Trash All" mode, Sims may place any handheld object in either of these barrels so that the objects are liable to be destroyed. It is therefore a good idea to pay attention to the Sims actions around the barrels if you don't to lose something valuable. In practice, the particular placement of either barrel relative to other usable surfaces can usually guide which type of objects the Sims will automatically trash.

If "Trash All" is selected, the player can also use the mouse in design mode to place an unwanted object in a cheater's barrel, unless the barrel is near the road on a locked tile. These barrels can be an effective way to dispose of too much wealth - instead of selling it conventionally and receiving cash in return. Note that there is no actual requirement to place either barrel near the road, even if there are no conventional trash receptacles on the lot.

Like the original set, Eat and Salvage are available from this Trash Barrel and Trash Bucket, not only for Sloppy Sims (with neatness of 1 or less) but also for all Zombies and Active Werewolves. Based on the Community Trash Can, this is a bottomless garbage disposal container that never becomes full. It can completely replace the standard residential and community trash cans on any lot - use "MoveObjects on" if you want to delete the default game objects.

In design mode the four trash barrel variants can be distinguished, not only by the popup description when you pass the mouse over them, but by their differing fill levels, as shown in the attached comparison chart. The Rogue's Trash Barret is also shorter than the others, and its fill level does not change when going to live mode. This Trash Bucket functions as a small trash container that eventually must be emptied, filling visibly with a trash (or other selected texture) as the Sims use it. The trash bucket displays six levels of "fullness", from completely empty to completely full. As you place the bucket in buy mode it will appear one level less than completely full so that you can easily select the trash texture that you want. Once you place the object and run the game the bucket will initialize to the empty state.

Maids will automatically empty this trash bucket as they would any other trash receptacle. Alternatively, the contents can be taken to the Seasons composter, if available. The trash bucket will produce an offensive green odour if left unemptied for too long.

Note that if Sims are using this bucket to dispose of homework, the bucket must be emptied before the student goes to school again, or else the unfinished homework will be counted against the student's grades. A similar case exists for bills, but Sims are allowed a longer period to pay them.

In design mode the Omnivorous Trash Bucket can be distinguished from the Traditional Trash Bucket by its lower fill level, as shown in the attached chart. Its recolours are slaved to any one of the four available Cooper's Trash Barrels, including the one distributed here. At least one type of Trash Barrel must be included in a Downloads folder, otherwise this bucket will be displayed with a flashing blue texture.

You may include these objects in any uploaded lots, whether for free or pay. Please include a credit and link to this page. It would be nice if you sent me a PM with a link to your uploaded creation, but this is not required.