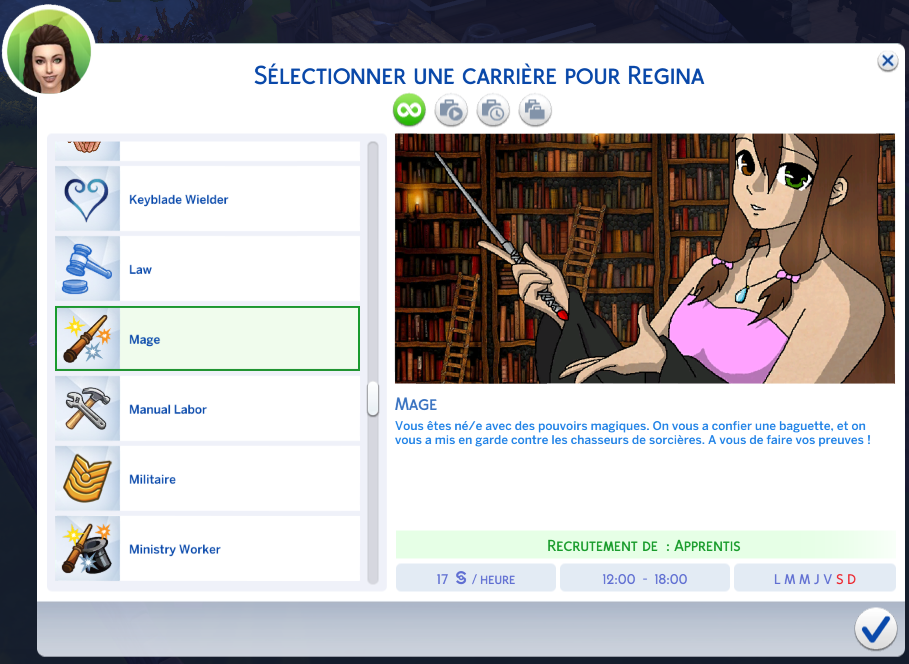 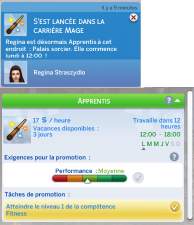 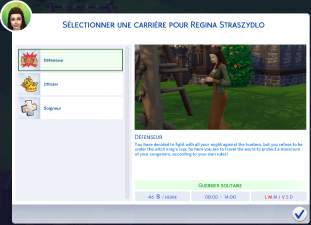 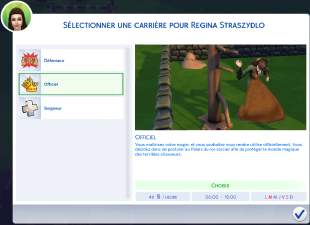 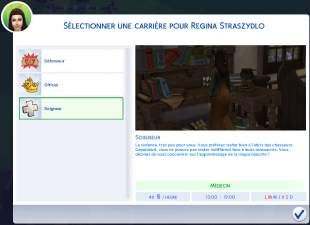 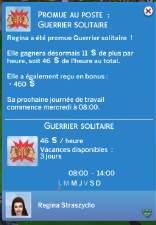 119 Thanks  Thanks     31 Favourited
At the same way that my careers of "witch hunters" and "black hunters", it comes straight out of my literary saga "The School of Bermuda". I do not mention the school of witchcraft, so the career will be equally suitable for those who wish to make a history without school or a story before its existence.
The last promotion of the "official" road is called "Samurai". This is because the wizard king, in the original story, is Japanese, and his palace is in Japan.
I hope that you will like

Mage
You are born with magical powers. You were given a wand, and you were warned against the witch hunters. It's up to you to prove yourself!

Path 1 : Defender
You have decided to fight with all your might against the hunters, but you refuse to be under the witch king's cup. So here you are to travel the world to protect a maximum of your congeners, according to your own rules!

Level 4 : Lone Warrior (- - W T - S S, 46?/h, 276?/d, Fitness 7)
You are still a young wizard or a young witch. You have met few other wizards and for good reason: the hunters are never far away. Get ready, because the time to prove yourself will come sooner than you think!

Level 6 : Archmage Mercenary (- - W T F S S, 73?/h, 584?/d, Fitness 9)
You finally decide to be cunning and clever using your magic to lead the hunters to the wizard jail rather than to death. The king and the rest of the magical world finally recognize you at your true value!

Level 7 : Master Wizard (M T W T F - -, 123?/h, 738?/d, Fitness 10)
You are tired of fighting. your injuries are painful, you just want to ask yourself, maybe start a family if you do not already have one. However, you will not let the hunters wander with impunity. You are master of a new young wizard!

Path 2 : healer
Violence ? No thanks. You prefer to stay well away from hunters. However, you can not remain indifferent to their massacres. You decide to focus on learning white magic!

Level 5 : Miracle worker (M T W T - - -, 59?/h, 413?/d, logic 7, Herbalism 4)
People love you. some travel miles to get treated by you! Some hunters approached you, but you made them believe brilliantly that you were only a rather talented doctor. Do not attract too much attention!

Level 6 : Healer (- - W T F S S, 73?/h, 584?/d, logic 8, Herbalism 7)
You are more and more asked, but also more and more watched. hunters are still lurking in the area and your "miracles" are becoming less common because you do not dare to use your magic too much. You were told not to overdo it!

Level 7 : White mage (M T W T F - -, 123?/h, 738?/d, Logic 10, Herbalism 10)
You are officially a wizard. The hunters have found you, but fortunately the wizard king has sent you guards to protect you. You have changed your identity, and you are now an official white mage of the court. What a promotion!

Path 3 : Official
You master your magic, and you want to make use of it officially. So you decide to apply to the Palace of the Witch-king to protect the magical world from the terrible hunters.

Level 6 : King's Guard (- - W T F S S, 73?/h, 584?/d, logic 7, Fitness 9)
Here you are officially in the custody of the king. Whether in the throne room or at the entrance of the Palace, you must remain vigilant! If the hunters managed to break in here, the magical world would be lost without its king!

Level 7 : Samurai (M T W T F - -, 200?/h, 1600?/d, Logic 10, Fitness 10)
The Sorcerer King is rising to the title of Samurai his best guards! Some are assigned to his personal protection, and others are sent around the world to fight the hunters and protect other wizards. What will be your role?

Need more information?
Back to download view
11 Comments / Replies (Who?)