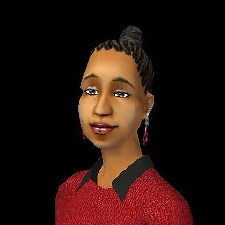 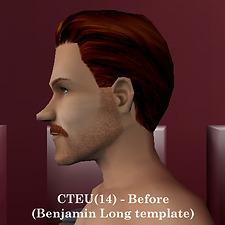 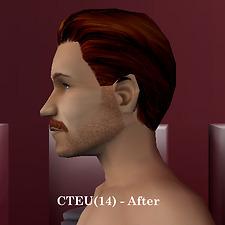 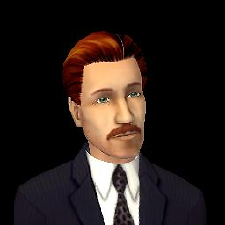 Open thumbnail gallery
782 Thanks  Thanks     86 Favourited
This is a new mesh, and means that it's a brand new self contained object that usually does not require a specific Expansion pack (although this is possible depending on the type). It may have Recolours hosted on MTS - check below the description for more information.

Picked Upload! This is a picked upload! It showcases some of the best talent and creativity available on MTS and in the community.
Replacement Face Templates!
Special Thanks to: Motoki

This new type of hack/mod overwrites the face templates in BodyShop and CAS with faces of your own creation.

What does this mean? Most importantly...

You now can populate your neighborhoods with townies and NPCs that are not Maxis butt-ugly!

For this set of faces, I took the Maxis default face templates and tweaked them to look a bit more normal. No huge trout lips, doll eyes, and other wildly exaggerated features. I did not go for 'beauty' in creating this set, just for more normal-looking sims. ALL age/sex groups have been modified. For the curious, I pretty much followed Gigge's tutorial on how to make Maxis faces look more realistic:

Getting Away from Anime: Making Sims Faces Look More Realistic

PLEASE READ ALL OF THE FOLLOWING BEFORE POSTING QUESTIONS...

Instructions:
1. Download the three files called "new faces".
2. Unzip into the Downloads directory. For those who have Nightlife, you might consider putting these files into a sub-folder of your Downloads directory for better organization. I put mine in Downloads->Face Templates

Recommended:
After you've put the template mods in your downloads folder, CAS will recognize them but might not display the new thumbnail(s) of the modded template(s) immediately. All you have to do is quit out of the game and delete this file:
"C:\My Documents\EA GAMES\The Sims 2\Thumbnails\CASThumbnails.package"
It's perfectly safe to delete. The game will regenerate new thumbnails for CAS when you restart the game. You might even go ahead and delete the file right after installing the mods just to avoid the problem completely.

Effect on your game:
1. All full face templates and face part templates (noses, mouths, etc.) in CAS and BodyShop will be replaced by these files.
2. The new templates overwrite the default templates. No way is known yet of expanding the number of templates available.
3. The face templates will be used whenever a new townie or NPC is generated by you (using cheats) or when the game creates a new one on its own.
4. They also become the stock choices available when you create your own sims.
5. The templates are used by ALL neighborhoods in your game. There isn't a way to make different template sets that only show up in certain neighborhoods.

What this mod doesn't do:
1. It doesn't prevent the game from choosing bad combinations when randomly putting together townies/NPCs. For example, the game could pick an asian face and give the sim dark skin, green eyes, and a red mohawk.
2. It should not change your existing townies and sims. Only new sims that are created after these files are put into your game should be affected. As such the best way to have all your townies/NPCs conform to these templates is to start with a brand new neighborhood that has been wiped clean with the "deleteAllCharacters" cheat. Of course, no one is stopping you from killing townies in your existing neighborhoods and letting the game fill in new ones!
3. It doesn't allow the Elf/Vulcan face to be used as a townie template. However, people interested in making that a possibility can follow Motoki's tutorial and use the Elf/Vulcan face as a starting point to make new modded templates for any of the face families that are used by townies/NPCs.

If you don't like one of the templates or want to replace it with a different one, just identify it by number/name and delete/replace it. My templates are numbered in the order they show up in CAS/BodyShop from left-to-right starting on the top row of each selection screen. The funny four-letter name (e.g. - CSLA, CMAY, EAFR, etc.) is the internal name for each family of related templates.

Known Issues:
1. Faces 21 (CPER) and 25 (CSLA) are only available for adults. This appears to be a Maxis problem. The corresponding faces for other ages do not show up in CAS/BodyShop. The base faces ARE included in the game file "CASFaces.package", however, so if someone can figure out a fix to get them to show up in the game then the templates can be adjusted for those missing ages as well.
2. If you want to get rid of a template because you don't like it, it is best to delete all templates with the same number/family name. If you only delete one age group for a given family, then a sim who age transitions might make a radical shift in appearance to something totally unlike what they looked like before.

As with all new mods, USE AT YOUR OWN RISK! The testing I and a few others have done have not revealed any major problems so far. Most problems seem to spring from have an incomplete "family" of faces which is not an issue with this download. If you find any undesirable effects, please post them here or on Motoki's tutorial thread.


WANT TO LEARN HOW TO DO THIS YOURSELF?

The potential for people doing their own sets is very open-ended. Want townies/NPCs that all have anime faces to match your playable anime sims? Particular facial characteristics of a certain race for an entire neighborhood (Chinese, Indian, Caucasian, Alien)? Elf/Vulcan ears on every template face?

Motoki's tutorial can be found in this thread:

Here's some files that should also help you get started:

Base templates for making your own!

RE-POSTING: No one needs permission from me to repost these modified faces elsewhere except that if you repost them AS-IS with no modifications, please give proper credit.