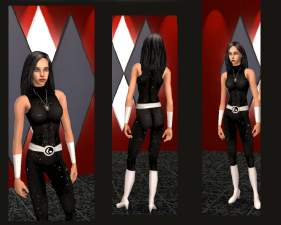 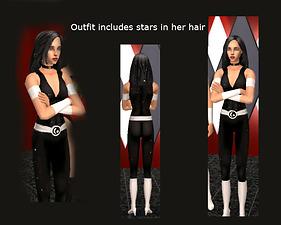 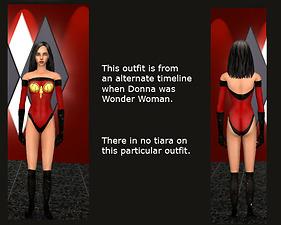 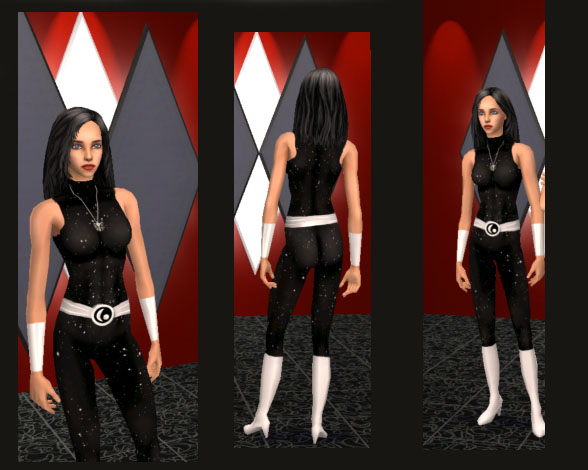 Donna Troy has been my favorite female hero ever since I discovered the Teen Titans comic books. Giving up her Wonder Girl costume, she now calls herself Troia. She is, perhaps, one of the most complicated DC Comic heroes ever to appear due to her many origins that were finally settled prior to "One Year Later". If you want her full bio I suggest visiting Titans Tower.

Included is the costume of Troia prior to death, her current costume (with stars in her hair), and an alternate timeline costume where she had become Wonder Woman.

The only mesh you have to have to get these Sims to function is Particleman's "Wonderbra" Heels Mesh so it should work with any expansion or just the original game. Everything else is made by Maxis or me.

Because the re-upload switched the order of the screenshots/download files the outfits are as follows from left to right:
The black one with the collar/stars in the hair is Troia Reborn.
The red/black outfit with the "bullet breasts" (as Lynda Carter calls it) is Wonder Woman Donna.
Finally, the all black one with the eagle pendant is Original Troia.


I would like to thank the following people for making this possible:

I do not own Troia or any other DC Comic hero. The trademarks are the property of their respective owners. Costumes, Logos, and Characters copyright DC Comics, Inc. and its licensors. All Rights Reserved.