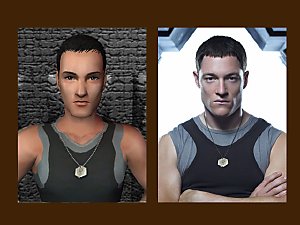 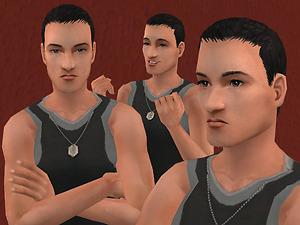 Open thumbnail gallery
105 Thanks  Thanks     5 Favourited
Note: Before downloading, please see what I wrote HERE.

Lieutenant Karl Agathon who is also known as Helo is an officer of the Colonial Fleet and is stationed on Battlestar Galactica.

He survives the cylon attack on Caprica and manages to stay alive until he was rescued from Caprica in about 6 months later.

He then falls in love with a cylon model Number 8, which is now known as Athena, and his love managed to convert Athena to work with the human. He also fathered Hera, the first human-cylon hybrid.

Helo might not be the best looking guy or the guy with the best physique on the entire fleet, but he is the best character in the series. His passion, love and dedication towards his family and friends makes him special. Plus, unlike most man in the series, he has a good soul.

Okay, enough rambling. So, may I present you, Karl Agathon aka Helo.

He came with the standard colonial fleet officer 'stand by' outfit, that can be wear casually or during work-out session.

He needs a special 'blush' that contains his facial features, but don't worry, this blush is made so that it can be wear with other blushes and use the lowest layer, so you can apply makeups and lipstick on him if you want, sicko! :P

His wife, Athena might be made in the near future. Notice how I bold the word might, so no pressure please. :P

Additional Credits:
Special thanks to HystericalParoxysm for her textures, tutorials & advices.
Also thanks to Fanseelamb for a little bit of her textures.
And not to forget Nihilin for her SimCribbling skintone edit.

I also would like to express my almighty thanks to Tigdad, JB, D and all other members of MTS2 #create for moral support. :P