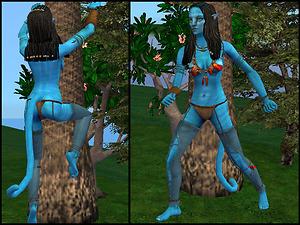 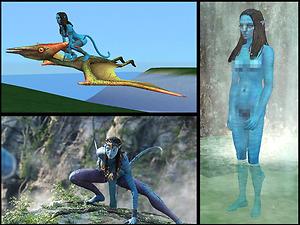 This is the beautiful Na'vi Neytiri, played by Zoë Saldaña in James Cameron's Avatar. She is the princess of the Omaticaya clan and a fierce warrior. Jake Sully is now available here.

*Please use Clean Installer to avoid "missing ep" issues as suggested in the installation instructions tab above^*
or if it still does not work properly with Clean Installer (or you own a mac and can't use clean installer), the extracted files are available on mediafire here. Accessory meshes included:
-elf ear #1 mesh by Ren(Louis at SimCribbling) fixed using this tutorial by HystericalParoxysm so it should not flash blue if you have pets ep.
-Jewelry set mesh by lianasims

I know she is missing her queue (hair braid in the back), but the hair mesh I used was the closest I could find for her. If someone ever makes/finds a braid as an accessory, let me know because I would love to add it.

Thank you to all the wonderful custom content creators who made her possible!

Additional Credits:
In screenshots
Poses and pterodactyl by Synapticsim. Waterfall shower by Marvine.


These recolours may or may not be endorsed by sugarandcaffeine.