by scumbumbo Posted 18th Oct 2014 at 10:21 PM - Updated 17th Nov 2018 at 6:55 AM by scumbumbo : BUGFIX - Updated for latest game patch (11/13/2018)
February 06, 2020 - Scumbumbo has passed on but his work and memories are still being kept alive by many of those whose lives he has touched. To download fixes for his mods, please check <a href="https://scumbumbomods.com/">https://scumbumbomods.com/</a> and please direct any questions or concerns to his discord channel linked there. 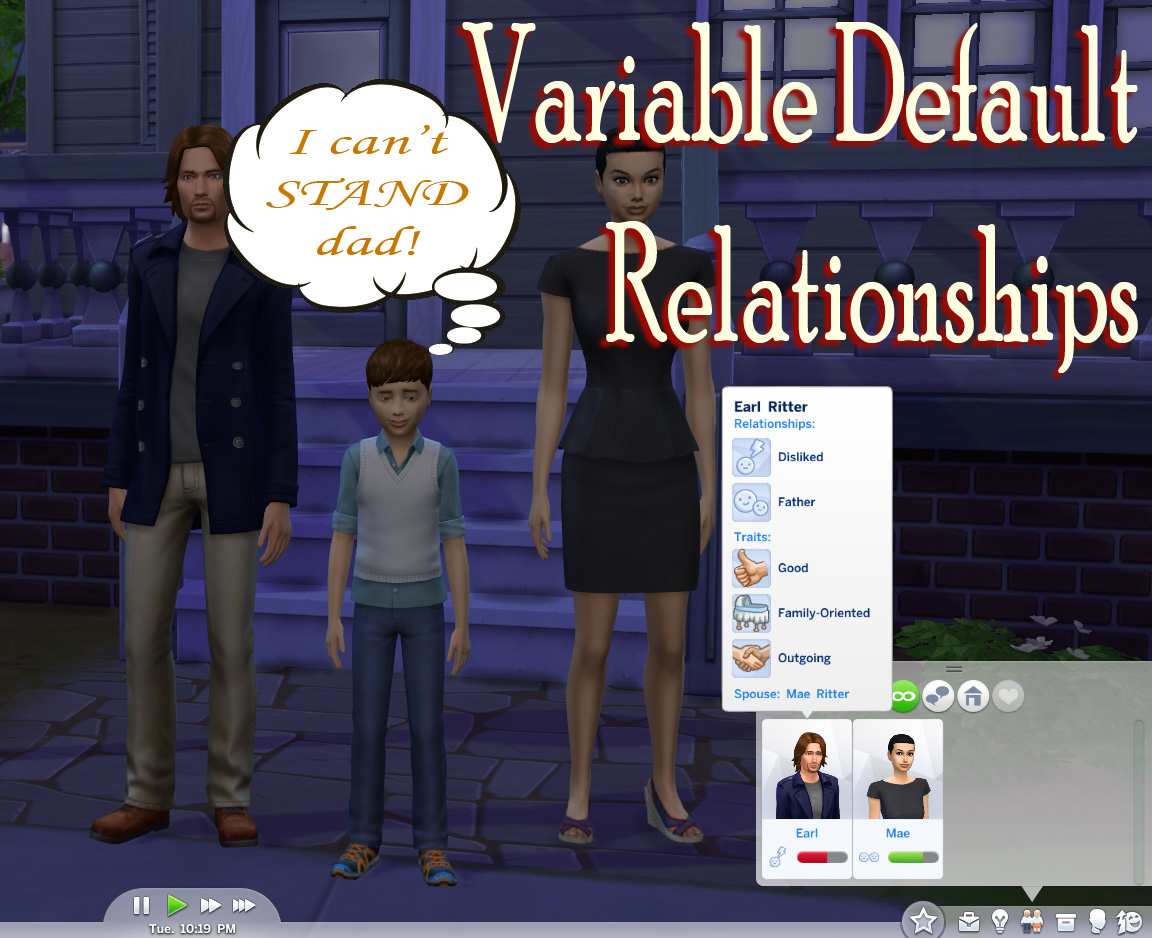 If you downloaded the update for this mod released on 11/13, it WILL throw exception errors in your game. The mod has been updated to fix this.

Everybody in a new household gets along by default. HOW UTTERLY BORING! Want a change? Want a challenge? With variable default relationships, your next household might be completely disfunctional!

This Mod will vary the starting sim relationships when a new household is created. The relationships can range anywhere from outright hatred to the very best of friends.

Both friendship and romance relationships vary. A married sim's love may not be reciprocated, or perhaps both partners hate each other and it's purely physical, or they could be great friends but the romance has gone stale!

The variance is not purely random. For those who know about probability, the resulting relationshps are based on a gaussian distribution centered on the default relationship values.

The mod is available in three "strengths":
Since the results are based on statistical averages, even the lowest strength can on occasion create sims that utterly despise each other. It will be rare, but it is possible. BTW: I generated a lot of families during testing to tweak the results, but I am interested in any opinions as far as the tuning of the variances. Too much? Too little? Let me know!

Unzip the desired strength version of the script, a .ts4script file, from the zip file into your game Mods folder. This is a script mod, so scripting must be enabled in your game options.

Use only one of the available strengths. You can change your choice at any time by replacing the .ts4script file in your Mods folder with one of the other strengths.


Install only ONE of the strengths below. See the mod description for more information. If you change strengths, be sure to remove the old version!

Need more information?
Back to download view
66 Comments / Replies (Who?)