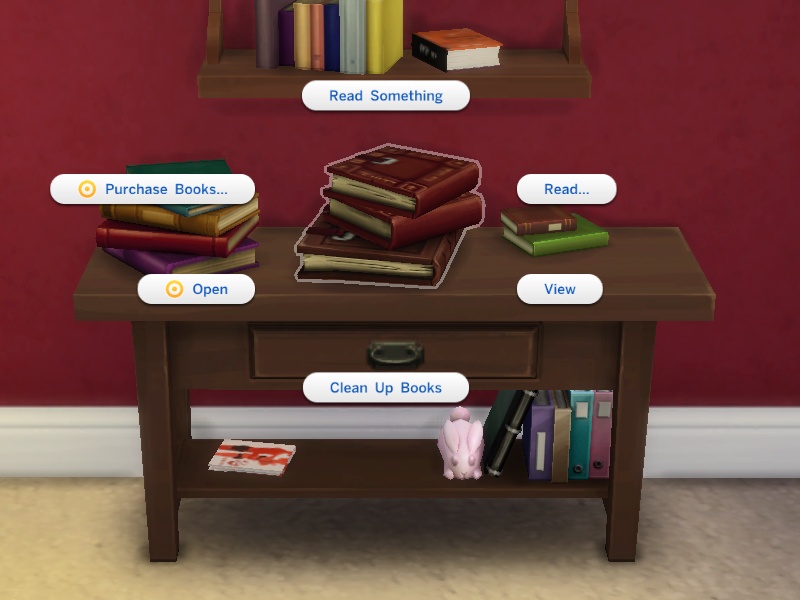 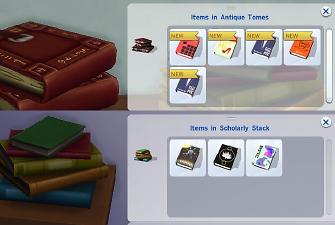 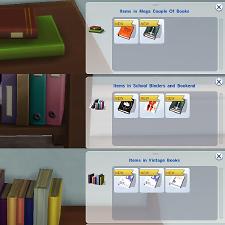 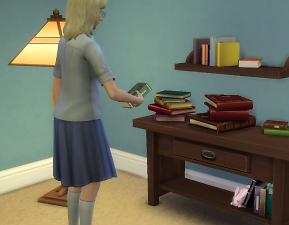 818 Thanks  Thanks     222 Favourited
This turns five Maxis decorative book piles into miniature bookcases so that sims can actually read them. They work like all other bookcases; since they're smaller and cheaper they also have less books to start out with (between two and five, see screenshots).


2015-06-25: These do not work with current games (1.8.something and possibly earlier) -- more specifically, they cannot sit on the surface of other stuff (they still work for me when on the floor but that's not really how they are supposed to be used). My best guess is that something about how the game deals with the routing or slots has changed between then and now; the actual tuning I used for these hasn't changed in ages so there's not really anything I can do on my side. I've inquired about it here if anyone's interested.

2015-05-07: The version with the custom tuning is currently not compatible with 1.6.69 -- I'll patch when I get around to it, but that may be a little while. For now I made an interim solution: this is using standard Maxis tuning, which means the starting books will be the same boring selection as in all other bookcases. This should work in all games, except that I can't test how the "retailComponent" tuning actually works in game (it seems to be about how objects can be placed when they are set for sale -- it's possible that these can only be put on the floor for sale, since the game thinks they are large bookcases .. I don't have GtW so I don't know how much of an influence this has.)

See comments: there is one report that it doesn't work with GtW installed; I don't know if the issue is with GtW or the current patch, could be either or both. 
Note that they do not give environment points like the originals (this is also adjusted in the interface); the Antique Tomes still function as a sculpture (i.e. can be viewed) but whatever supernatural abilities the original had, this one doesn't.

The cost the same as the originals and are in the same places in the catalogue, plus Bookcases.

This overrides the COBJ/OBJD of the following instances

The following books are included when buying each pile (there is no way to make them random, for all I can tell):

Note that if you have my "Clutter Anywhere" mod or anything else that overrides the COBJ of these, this may conflict -- the effect would be that if the COBJ from Clutter Anywhere is used, the Vintage Books and the Binders would not be in Bookcases and also wrongly advertise "Decorative Decoration" or whatever the wording is in the catalogue tooltip. The actual bookcase function would not be affected. If this bothers you, open the Clutter Anywhere package and delete the resources with the same instances as these (the placement edit is also included in this mod, so that would be redundant). If you have the pre-Careers-patch version of Clutter Anywhere you should delete the "feetprint" packages from that.

According to the Maxians there is no way to predict which file is used when you have two of them since they are being read by some Windows function that "should be considered non-deterministic". See here for details if you're interested.

Need more information?
Back to download view
46 Comments / Replies (Who?)