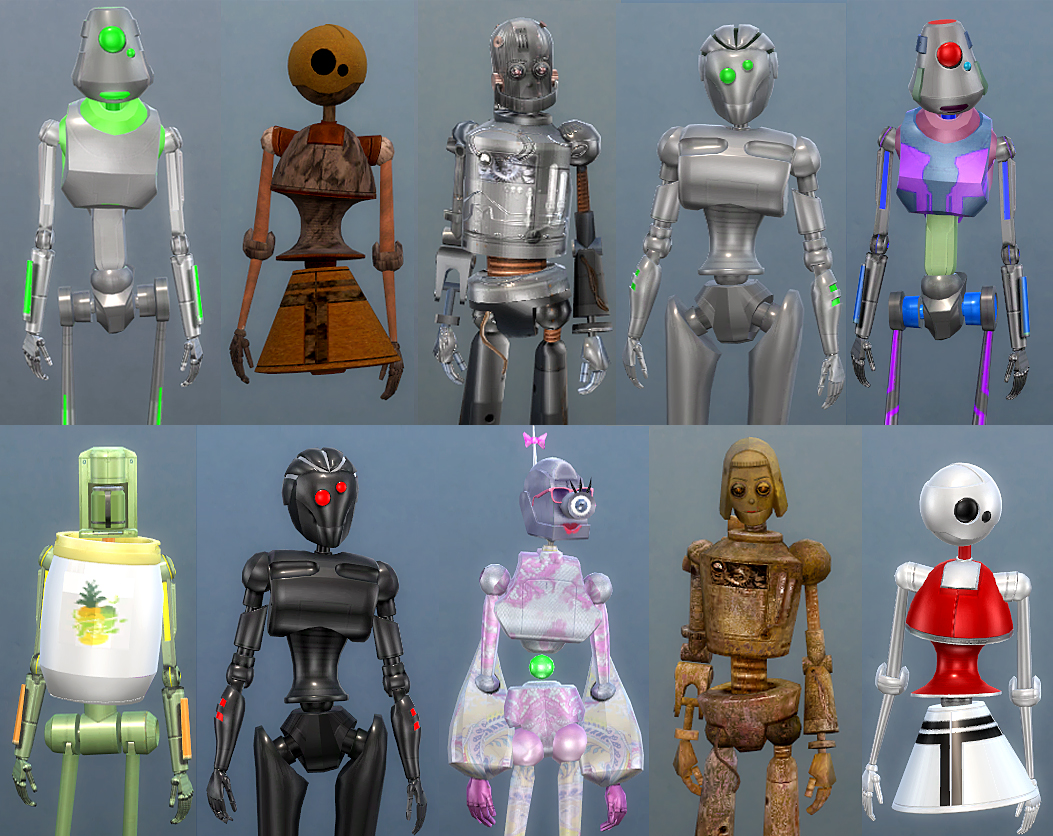 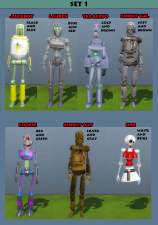 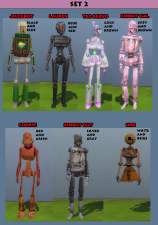 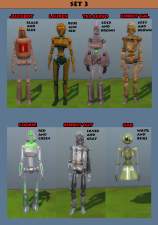 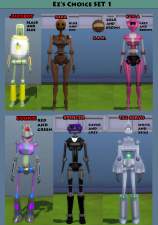 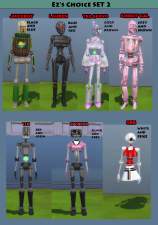 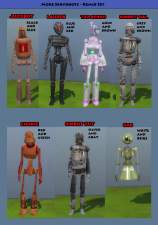 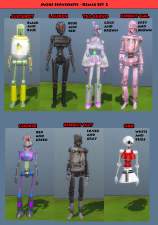 81 Thanks  Thanks     21 Favourited
This is a new mesh, and means that it's a brand new self contained object that usually does not require a specific Expansion pack (although this is possible depending on the type). It may have Recolours hosted on MTS - check below the description for more information.
***UPDATE JANUARY 19 2020: ADDED ALTERNATIVE DOWNLOAD FILE OF ALL BOTS IN SEPARATE PACKAGES***
As I've had several requests for different combinations of both this upload and my first one, Lots Of Bots, I've now added a new zipfile that contains all the bots as separate packages which you can install to make your own specific sets. I've done the same with Lots Of Bots, so you can now combine bots from both uploads.

Two things to remember: 1) You can only have one bot of each 'recolour' option installed at a time - eg, you can only have one Blue and Red bot, one Red and Green bot, etc. If you install two bots of the same recolour, they will conflict. 2) You must also install the LotsBotsServoVFXOverrideTuning package from the zip file or else the bots will have those glowing eyes and brain effects.

So: in your Mods folder, you install seven bot package files of your choice from this set and/or Lots Of Bots - one of each recolour - and the VFX override package.


* * *
Update Feb 22 2020: It was brought to my attention that the female TS2 Servo in Set 1 was not as shiny as she should be, and I discovered I'd mistakenly used a low-shine specular on that item rather than the high-shine one. I've now fixed it, in both the Set 1 combined package and the loose files package, so if you use that bot please download - very sorry for the inconvenience!

Coming briefly out of Sims 4 retirement because Discover University finally added two of my fave things - vehicles and robots.

Having made one set of Servo default replacements previously uploaded here, I found myself wanting a few more variations, plus I'd had a request for the TS3 Simbot as a Servo override too. So here are seven more models.

As with my previous set, it is a set of 'outfit' default replacements which simply replaces the Servo's seven recolour choices with new meshes and textures without doing any 'modded' stuff, the one small exception being that I had to modify the Buff tunings in order to get rid of the glowing eyes and brain effects (VFX). I didn't change the pie menus, the unactivated servo's appearance, or anything else fancy that changes game code. This is so that hopefully this item won't be broken by future game patches as sadly tends to happen to many mods and modded items, as we know.

There are three packages, consisting of seven robots with three sets of recolours. You can only use one at a time. But they can be swapped between gameplay sessions for a different set of recolours. Just be sure to delete your localthumbcache.package when doing that, or else you'll see the previous set's portrait and mood pictures in your HUD instead of the current one.

Most of the bots are brand new - I assembled two of them from my previous uploads: The female Servo from my Sims 2 Servo conversion uploaded here , and Orb the hoverbot is from my collection of TS3 Plumbot parts. The others consist of four new conversions and one new creation: Cookie and Lauren are new Plumbot parts conversions, the two Simbots are new Sims 3 conversions, and Juicebot is a new creation by me, assembled from Plumbot arms and legs, the juice keg from Discover University and a coffeemaker from the base game. Juicebot was inspired by a robot from Fallout 4, Drinkin' Buddy, who consists of a big beer barrel with arms and legs. He dispenses beer and tells bad jokes. The idea behind my choice of head for Juicebot was that once you get so 'juiced' that you need some coffee to sober up, he can supply that too. Unfortunately Juicebot can't really dispense drinks from his keg or his coffeemaker (although he can tell bad jokes), but he looks cute.

The bots are a variety ranging from shiny and pristine to rusty. As mentioned, I have not modified the pie menus, so the overrides retain the default recolour names such as Black and Blue, etc. All will be made clear in the below reference pics.

You don't need to go looking for them in CAS or anything like that, they will automatically appear in your game as a replacement for the default servo you would normally get. And two additional sets:
I also assembled two 'remix' sets consisting of models from both this upload and my previous one, to give more variety. The two sets, called Ez's Choice 1 and 2, consist of my own faves and there are reference pics of those sets in the screenies at the top right of this page (and also included in their zip files for reference).

ETA: Fulfilled a request for a remix set consisting of Simbot Gal from Set 1, Lauren, Servo, Cookie and Simbot Guy from Set 2, and Juicebot and Orb from Set 3. If you would also like that combo, I've now added it to the Files tab and added the reference pic to the set of screenies at the top right of the page (pic also included in the zip file).

ETA2: Fulfilled another remix request, this one consisting of Juicebot, Cookie and Orb from Set 1, and Lauren, Servo, Simbot Gal and Simbot Guy from Set 2. A good colourful choice for those who like colourful bots, it's now added to the Files tab and a reference pic is added to the screenies at the top right of this page and in the zip file.


When you build your Servo and are ready to activate it, you will see the default TS4 Servo in the stand. When you activate it, it will disintegrate and dissolve into Lauren. Then, just choose whichever robot you prefer by using the Modify Servo pie menu. ISSUES:
With the addition of the Servo torso-twirling animation, the more 'human'-bodied bots (eg Plumbots) will go a bit cinched/twisted at the waist when they twirl rather than twirling cleanly such as the Simbots and Juicebot. If Plumbot waists are bone-assigned to separate cleanly for twirling, they then come apart from the pelvis when they sit down, so I had to compromise by letting them twist. When I made my previous set none of the bots did the waist-twirl at that time, they only twirled their heads, and I saw the waist twirl for the first time when making these. So, my apologies that the Plumbots in my previous set have the same issue. Also because of compromises, please note that some of the meshes display minor warping or splitting when sitting, and in Juicebot's case a small triangle on his backside when bending over or recharging.

Although I was able to remove the glowing eyes and brain VFX, they appear on the servo's HUD portrait and Mood portrait. I've been advised that removing the effects from the HUD/Mood portraits could conflict with other people's mods which alter those portraits. So, it's best to leave it as is.


Now for a look at them in game, here is a short video showing them in action. Just don't let your bot relax in the hot tub, ha ha - you'll see what happens. A nice relaxing massage is much better for them! They also look totally cute when they sing.

And as with my previous upload, thanks again to CmarNYC for advice on how to make a multi-meshed recolour package, and to MizoreYukii for how to get rid of the unwanted glowing eyes and brain effects.

Thanks for looking, hope you'll find at least one of these colourful little guys fun.


INSTALLATION:
If using one of the original pre-made sets: Unzip the zip file of the override set of your choice, and move the .package file to your Documents\Electronic Arts\The Sims 4\Mods folder.
If making up your own set from the added zipfile with all the bots and the tuning file as separate packages: Extract the seven bot packages of your choice plus the VFX override package as instructed in the January 19 2020 update at the top of this page.

Polygon Counts:
The default TS4 Servo is 14201 polys, which is relatively high, so these are a bit of an improvement on it:

Need more information?
Back to download view
28 Comments / Replies (Who?)