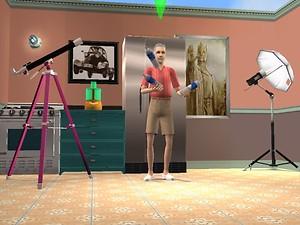 
>>> THIS IS THE FINAL RELEASE <<<
and probably the last one, except for possible bugfixes and small additions


b) _EnableColorOptionsMMAT.package:
This file must be copied into your *PROGRAM* installation folder (not in the Documents folder!).
Example: C:\Program Files\EA Games\The Sims 2 Ultimate Collection\Double Deluxe\Base\TSData\Res\Sims3D\
but if you have changed the installation path while installing the game, it may be different.

c2) Open the "ProgramFiles" folder and move the entire "zCEP-EXTRA" subfolder, along with the several files contained in it, in:
(Program Files)\EA Games\The Sims 2 Ultimate Collection\Double Deluxe\Base\TSData\Res\Catalog\


THE CEP v.9 WORKS IN ANY GAME, FROM THE BASE-GAME TO MANSION & GARDEN


THE CEP HAS NOTHING TO DO WITH CLOTHINGS, SKINS, HAIR,
ACCESSORIES AND SUCH. IT AFFECTS ONLY *MAXIS OBJECTS*

The CEP v9 enables colour options for Maxis objects shipped with:
The Sims 2 (base game) - University - Nightlife - Open for Business - Family Fun Stuff
Glamour Life - Pets - Seasons - Bon Voyage - FreeTime - Apartment Life
(plus almost all the objects from the Stuff Packs up to M&G).
It can safely be used by *ALL* users, with *ANY* game configuration

If you want to be sure not to miss a CEP update, subscribe to the CEP Updates Notification Thread

Starting from CEP v.8.0, both the Installer and the Manual Installation zip contain all the CEP resources:

The CEP can be installed automatically (Windows users only), or manually (Mac users, and anyone who wants to have total control on what happens on their computers

By now, the CEP is updated and supported by me (Numenor) alone. Nevertheless, many persons deserve our personal thanks and credits for their help:

3. a) Auto-Installer: extract the installer to your desktop and execute it; all the needed files will be automatically copied in the proper locations.
b) Manual Install: extract all the files from the zip in a temporary folder on your desktop; read carefully and follow the instructions provided in the TXT file contained in the zip.