Other - Above Ground Aquarium Using the Fog Emitter - by missroxor

UPDATE: It's been brought to my attention that the acrostacking method was broken a couple of patched ago. Therefore to do this tut you will have to use OMSPs and I also recommend the shiftable fog emitter. Sadly while this means using CC it does also make the whole thing a lot easier!

This tutorial will show you how to make a large above ground aquarium using the fog emitter (Ambitions required). Some building experience would be beneficial but is not necessary to follow this tutorial. The aquarium can be built on flat ground or over a foundation as shown below.

You will need the list of fog emitter codes which can be found here: Fog Emitter Discussion Thread

1. Build Your Frame
First of all you will need to create a frame for your aquarium. Since the aquarium can be quite tricky to build and you will be using some CFE (ConstrainFloorElevations cheat) I suggest you build the aquarium first then build the rest of your lot around it, at least for the first couple of attempts. You will need to move a sim in to the lot to be able to see fog emitter effects.

To raise the ground between the foundations you will need to use CFE: Open the cheat box by pressing ‘Ctrl’, ‘Shift’ and ‘C’ then type in ‘constrainfloorelevation false'. Then raise the ground sporadically so that it is very uneven but doesn't exceed the height of the aquarium wall. Doing this will mess up the walls of your aquarium but don't worry, we will fix that later.

Place your first fog emitter somewhere on the raised ground that you just created. Left click on the fog emitter whilst holding 'Ctrl' and 'Shift'. This opens the fog emitter menu. Select 'Set Visual Effect' and you will see the box below. In this example I have used the code 'fishdeathfishbowlseq'. There are almost 4000 other codes that can be typed into the fog emitter but for now we are only interested in those that are in the format 'fish>enterfishname<fishbowlseq'. You will find all of the codes in the thread I have linked to at the top of the page (they're in alphabetical order so just look for fish). You'll notice there are a lot of codes beginning with fish. They all have different effects. Some will give you larger fish but they will be stationary or 2D. The fishbowlseq option produces a smaller fish (the same size they are when you put them in a fish bowl) but they are animated.

Below is a shot of our first fish, the death fish. Notice how small it is, we will need to use a lot of fog emitters to fill the aquarium. (Note: You have to go to live mode to see the effects of the fog emitter). Fill your aquarium with as many fish as you want remembering to take into account any decorarations you want to place. Go to live mode and check that all of your fish appear. If they don't appear using the fishbowlseq codes you've probably typo'd. Double check your spellings using the list provided at the link above.

Now we can level the ground and fix our walls. (Use the level tool with CFE set to false)

3. Decorating the Aquarium
If you're going for a traditional looking aquarium you will want an uneven floor. Use the raise and lower tools to do this then level out the edges one side at a time. You will need to level the foundation again too but this time be careful not to go over the aquarium as this will flatten the floor again.

The aquarium is ready to decorate. Add rocks, plants and statues etc. You'll find a lot of usefull extras in the buydebug menu though many require W/A.

Below I have shown examples of all the effects useful when making an aquarium. These codes can be entered the same way we did the deathfish above and can be placed at ground level (except # 7)

I used 9, 10 and 11 on the ground floor. 11 doesn't show very well on the pictures but it comes up better in game. Once you have the inside bubbles placed where you want them move up to the second level. You may not be able to place anything over the aquarium. This is because we altered the ground level. To fix it just level out the top with the level tool. 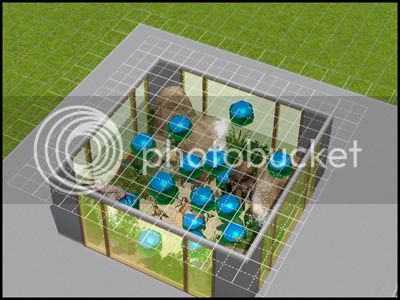 On the top layer I used 2, 3 and 4 to give the effect of ripples on the top of the water.

The last thing to do is decorate the walls and finish the rest of the structure around the aquarium. I have gone for watery colours to add to the illusion of water and for the purposes of this tutorial have done a standalone aquarium.

Below is an example of a much smaller aquarium that is semi enclosed.

Don't forget to undo all the cheats you activated, especially CFE!

Hope you have enjoyed this tutorial and more importantly, learned something from it. Please comment if you think I've missed something or haven't explained something well enough. All feedback welcome

Missroxor
Guys, rules are good! Rules help control the fun. ~ Monica E. Geller
46 users say thanks for this. (Who?)

A very nice tutorial, it shows some of the beautiful things you can do with the new fog emitter. Well written and illustrated, thanks!
fragglerocks

I think you've done a fantastic job with this tutorial. I'm so glad you posted this, because the aquarium you made in the contest was stunning!
Please consider taking part in LifesLover's "The Build To Plan" Contest. You'll make new friends and have tons of fun!
Ive
Top Secret Researcher
DELETED POST
14th Aug 2010 at 10:52 PM

This message has been deleted by Kaospilot.
LifesLover

This definitely helps teach how to use the fog emitter in different and interesting ways. Thank you very much. I loved your aquarium and I think you've done a fabulous job.
The Foundational Building Social Group
[you say you believe me but you don't deceive me]
Divine45
Test Subject
#5

Awesome and useful tutorial! Thanks so much!
AdonisPluto

wow this is usefull

finaly something i can work with for a bit.
reptile339
Test Subject
#8

Excellent Tutorial! It helps in simplifying the massive amount of fog effects specific for this application. The one thing I think I'm missing from your post is how you went about creating the "underwater colors". I've searched several of the sims modding sites and there doesn't seem to be any information on how to change the color or opacity of the window panes in order to create the illusion of underwater. Would you be able to elaborate on how you went about getting that effect?

Thanks again for the excellent tutorial!
treehugger11

quite beautiful.
Back to top