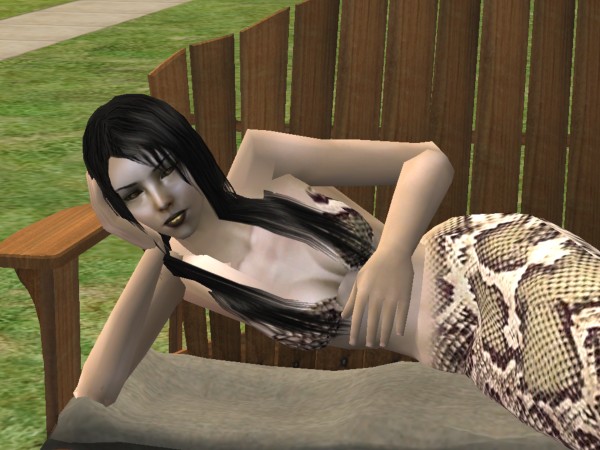 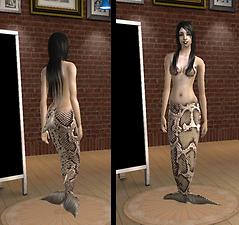 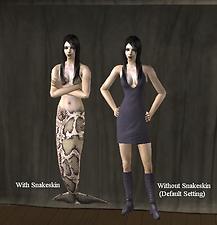 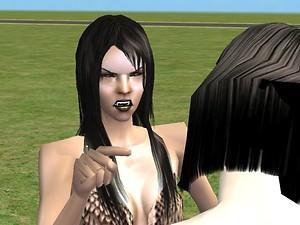 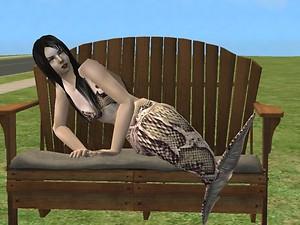 This is Eurydice, named after a character's name I found on the back of my "The Storyteller- Greek Myths" video tape. I was tempted to name her Medusa, but that seemed a bit cliche, and Eurydice to me had a more fresh ring to it. =D

Anyway, Eurydice is a cruel, cruel snake woman. She believes herself to be a very powerful being, especially with her dangerously sharp fangs and seductive powers. xD She is rather vain and terribly greedy as well, and takes pride in letting others do her dirtywork, then reaping the rewards herself.

I think she came out pretty well, and is one of my more menacing sims. =)

You will need to download the following meshes for this Sim to appear properly in your game:

First, for her lovely venomous fangs, download Generalzoi's Vampire Fangs for All: http://www.modthesims2.com/showthre...gs+for+everyone

Next you'll need the lovely Hair by Plicka, found on this Sim: http://www.modthesims2.com/showthread.php?t=123741

And, Last but not least, you need Marvine's Mermaid Mesh from InSimenator.net. You'll need to join to download, but InSimenator has lots of fantastic items which make it worthwhile to download. The direct link is http://www.insimenator.net/showthread.php?t=3503.


This Sim is not packaged with the Snakeskin Mermaid recolor shown in the images, so you will have to go to InSimenator and
download the snakeskin recolor and when in CAS, after this Sim is installed, change her outfit manually.
Download the snakeskin heres: http://www.insimenator.net/showthre...ermaid+recolors

This Sim is packaged wearing an original Maxis dress, as seen in this screenshot; the black one similar to that which Dina Caliente wears. So, it's normal that she will appear in that outfit until you change it with your mouse; it will appear under the full body clothing section. I would package her in the mermaid outfit itself, but Marvine's rules ask not to. =)


These recolours may or may not be endorsed by sunken-woglinde.