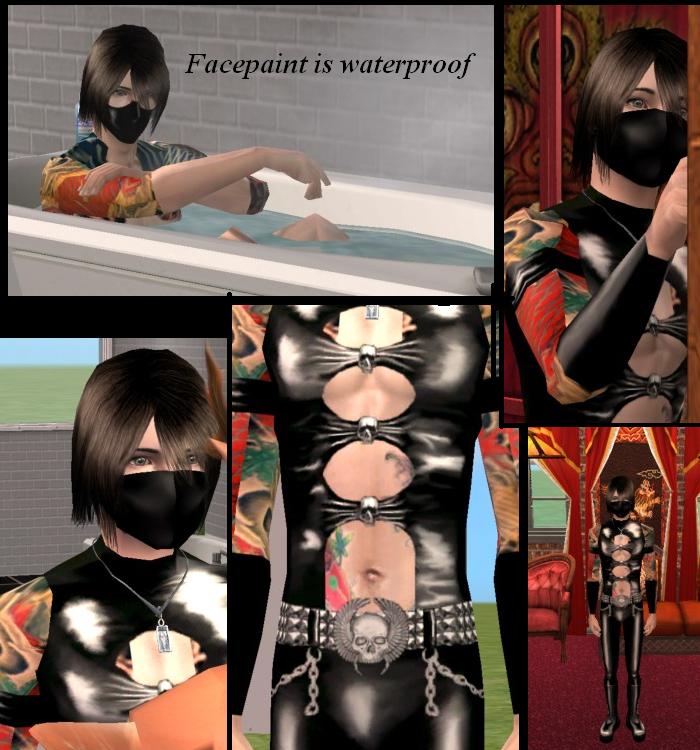 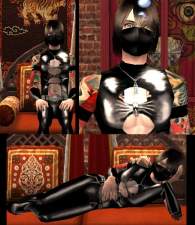 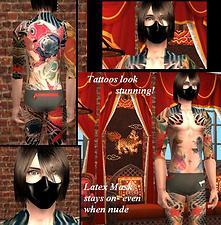 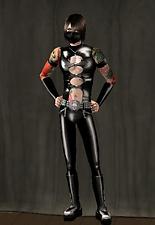 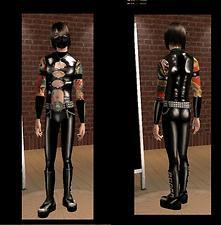 Hello Everyone! This is my beloved Chrno, who I believe is my most attractive male sim. =) If you have seen him here before, that is because he has been uploaded once before, but, I deleted the old thread and gave Chrno a few tweaks, such as adding Avund's Latex Face mask to cover him when the surgical one doesn't. =D

Both masks are removeable; Chrno looks handsome even without them, but I thought he looked better with. The first mask, which is shown in CAS and when he is wearing his everyday clothing, is Boblishman's Surgical Mask, which can be found under the glasses section if you wish to remove it. As for the second mask beneath it, it appears in full face paint, and can also be easily removed.

Anyway, Chrno(in my game) is a knowlage aspiration sim, who often bodybuilds, then cools down by flipping through a good book. (Thus the term 'wise fighter'.) He's a mature, quiet sort of sim(or at least, as quiet as Sims get xD), and once his loyalty is earned, you can count on a good guardian through thick and thin.

His backstory is that he and his sister where raised in a family of crime, and through witnessing a long term of events, Chrno developed his own sense of justice and virtue that was quite different from the views of his family. Because of this, he broke away from the family 'business', while his sister stayed behind and trained her hardest to try and raise a new revolution in destruction.

Chrno, who had once been close to his sister, now has to deal with the fact that she'll be coming after him eventually for dropping the family business and going it alone. And when she does show up, it's very likely that it won't be for a cup of tea...This thought is quite painful to the poor guy, as he and his sister had been very close as children.
For now, though, he just tries to focus on what is, and not what could be.

I'm going to make his Sister and submit her very soon. =)

Once everything is downloaded, Chrno should appear in the game wearing everything in the screenshots. Also, as previously stated, you'll notice from the extra screenshots that when wearing pajamas/swimwear/etc, Boblishman's surgical mask if removed; but, his face will remain covered by Latex Face Mask paint(appears in full face makeup), which will stay on him permanately unless you remove it. =) He still looks good in either one!

Also, be sure to thank liegenschonheit for her fantastic work on Chrno's skin. Her Yazuka tattoos are by far the best tattoo skins I have ever seen as of yet.

You'll need to download the following meshes for Chrno to appear in your game properly.

Also, there is Chrno's necklace; it's the Male Necklace from Rosesims2.net under accessories. You'll need the mesh, but, this mesh isn't 100% nessasary; Chrno will work without the necklace mesh, but, it will obviously mean he will appear without a necklace. =P

Also, if interested, the swimsuit Chrno is wearing in the photoshoot is by Barcelonista, and can be found here: http://modthesims2.com/showthread.php?t=122128

Please be sure to go and hit the "Thank you" button on every one of these links that you can. Without the hard work of these wonderful simmers, this sim would never exist. They need some credit!

Also, if you like what you see here, PLEASE leave a comment! Your comments are my encouragement and inspiration. Thank you very much, enjoy! ^^


These recolours may or may not be endorsed by sunken-woglinde.