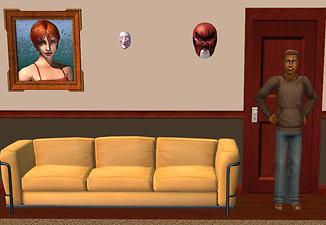 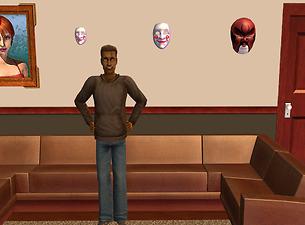 229 Thanks  Thanks     15 Favourited
This is a new mesh, and means that it's a brand new self contained object that usually does not require a specific Expansion pack (although this is possible depending on the type). It may have Recolours hosted on MTS - check below the description for more information.
Remember the hype before Nightlife about jewelry? There was a girl on the box with a bracelet. Remember how such jewelry didn't make it into the game? Well, that might not be entirely true.

I've found a dangling earring (GUID 0x40C5D592), a bracelet (GUID 0x2FB90DAB), and this jester's mask (GUID 0xDF72D5BD) accessory. They're more like normal objects than normal accessories. Apparently, each were to be snapped into an Adult female's body slots. It is possible EA was still working on what would become the "Bon Voyage" means of Sim jewelry.

I'm not one to do accessories, so I'll leave the conversion to accessories or Bon Voyage jewelry to someone else.

But I do like that jester's mask and its creepy creepiness. I made it into a base-game compatible wall sculpture and gave it a new GUID. Then I made a blue-ish/green recolor (middle mask) and a yellow/black recolor (far right mask).

As you can see in the picture, the mask is somewhat smaller than the other mask wall sculptures...but come on, do you really want that grin to be any larger when you see it in your nightmares?

Oh, bonus tip: They're double-sided. Placing them on a window (such as the large OFB window) and viewing them from behind creates an optical illusion that they're turning with the camera .

I apologize for any nightmares.

Polygon Count:
420 polygons. The only change to the mesh was when I moved it back to be against the wall.

Update (March 28, 2011):
As requested by CatOfEvilGenius, I've added a larger version (same polygon count). The size comparison is shown in the second screenshot with Joe Carr (the picture with the brown couch and two Jester Masks). The original is on the left and the new, larger one is to its right. This version is Repository-linked to the original so it will get it all recolors of the original. You must download the original for the larger version to have any textures.

Policy:
Since it is a Maxis mesh and texture, you're free to do whatever you want with it as far as I'm concerned: include it in lots, make it into a creepy lamp, turn it into a wearable mask for Sims, etc.

Additional Credits:
Maxis for the mesh and texture.

Jester Mask as an accessory by VioletPadfoot