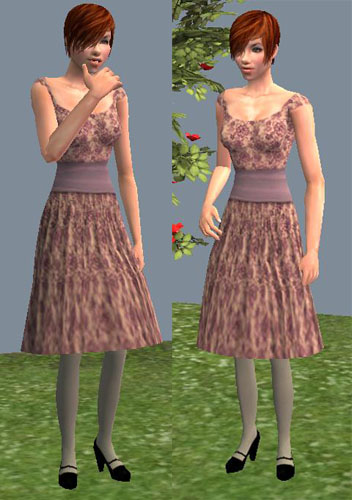 458 Thanks  Thanks     19 Favourited
This is a new mesh recolour, and means that you will need to download the particular mesh itself in order for this to show up in your game. See the Meshes Needed section or read the text for more information.

Picked Upload! This is a picked upload! It showcases some of the best talent and creativity available on MTS and in the community.
As a big fan of the Dresden Dolls, I love Amanda's style, and the dress on the front page of their official site especially caught my eye.

There is a bit of unavoidable blurring/distortion toward the bottom of the dress due to the way the mesh is mapped. I've tried to minimize this as much as possible, and I don't find it that noticeable once you're playing a sim with it in the game.

This will show up under Everyday and Formal.

Updated: If you use bump maps and have already downloaded this dress and had problems, please re-download: I have fixed a problem with the bump mapping. My apologies... my graphics card doesn't display them and it's easy to forget.

Apparently this and several other custom meshes may display oddly in the game and Body Shop with recent expansion/stuff packs (looks like a bright light is shining on the entire body, but not the head) - I do not see this problem myself and it appears to have been unrelated to the bump maps (as fixing them didn't fix it) so I'm at a loss. Only one user has reported this, so they'll probably work fine for most people, though.