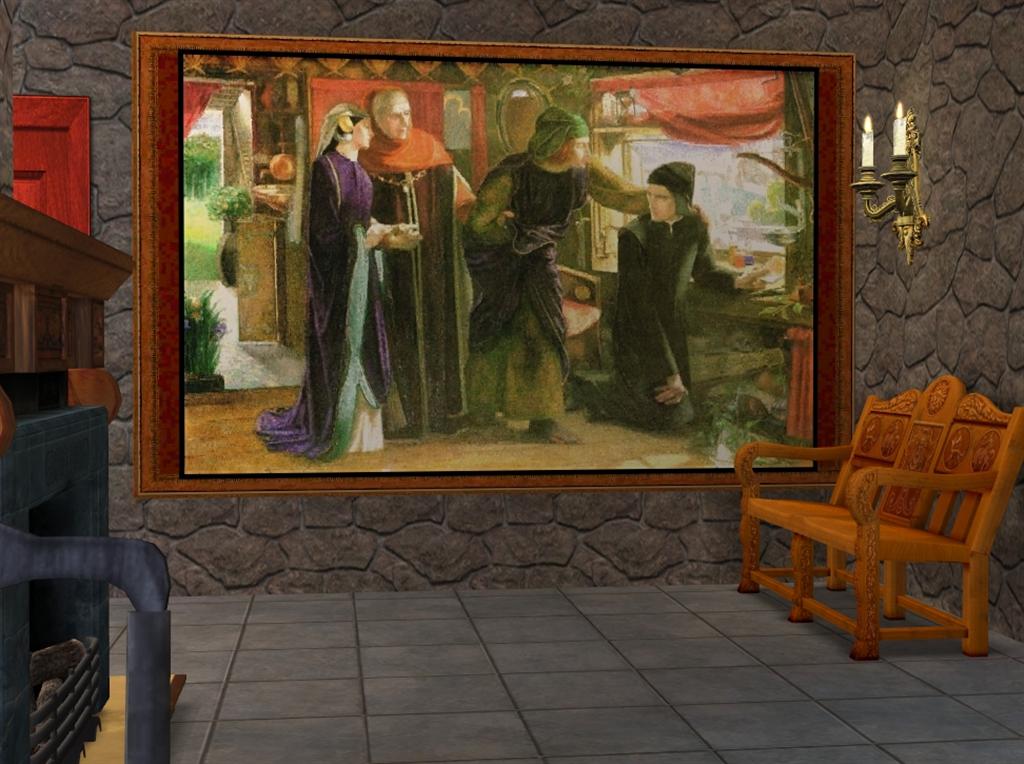 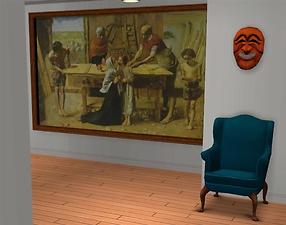 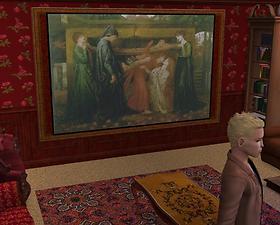 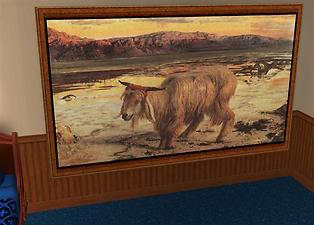 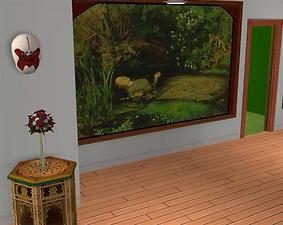 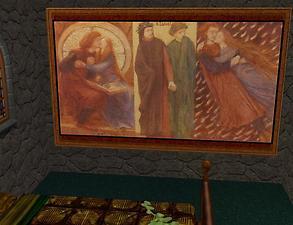 170 Thanks  Thanks     5 Favourited
This is a Maxis Recolour which means that it is a recolour of an item that already exists in your game. Please check the Expansion pack requirements to see which game pack it recolours.

This collection includes works from the three founding members of the Pre-Raphaelite Brotherhood, William Holman Hunt, John Everett Millais, Dante Gabriel Rossetti. To show these paintings off to maximum advantage, I used the Nightlife "Two Dogs and an Olive" source picture, currently the only one in the commercially distributed Sims collection that covers four tiles in width. "Two Dogs" costs §2900, and has an Environment value of 10.

As it comes however, "Two Dogs" does not provide any framing at all, typically making it unsuitable for use with conventional artworks. Therefore I created a frame from portions of the base game "Red vs. Blue Oil Portrait", but with quite a bit of retouching and texturing along the way. I have provided these modified files as a kit with HTML instructions, 2dogs.zip, for your free use in building your own framed recolours using the SimPE Object Workshop. The included files and tutorial method may be utilized for any projects at all, whether free or for payment. It would be nice if you credited me when distributing the result and sent me a PM, although this is not strictly necessary. Please do not re-post 2dogs.zip itself or its source files anywhere, since this may cause confusion, particularly if I modify or improve them later.

Now onto the works themselves, as contained in pre-raphaelite_2.zip: 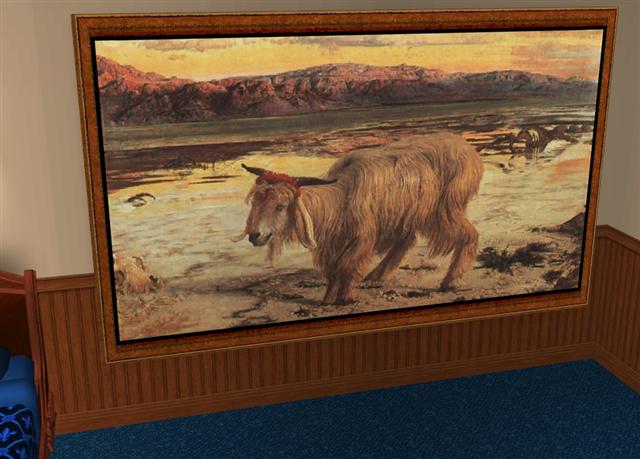 "The Scapegoat" (1854) by William Holman Hunt, places its realistically detailed subject in an eerie surrealist landscape, in which its doom is felt rather than seen. 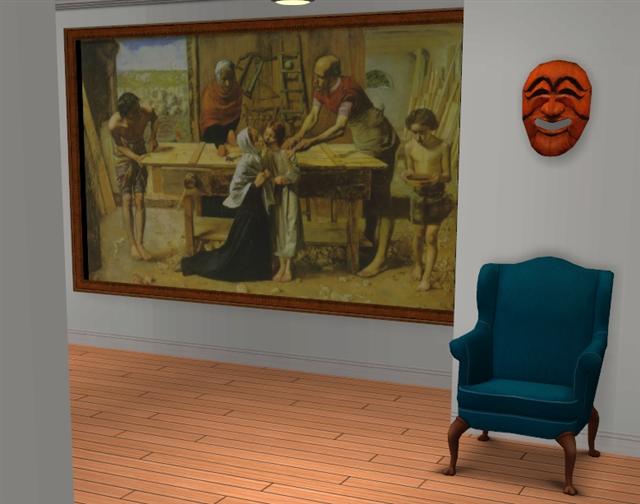 "Christ in the House of His Parents" by John Everett Millais, also called "The Carpenter's Shop" (1849-1850), scandalized many Victorians - including Charles Dickens - for its depiction of the Holy Family as plain working folk. 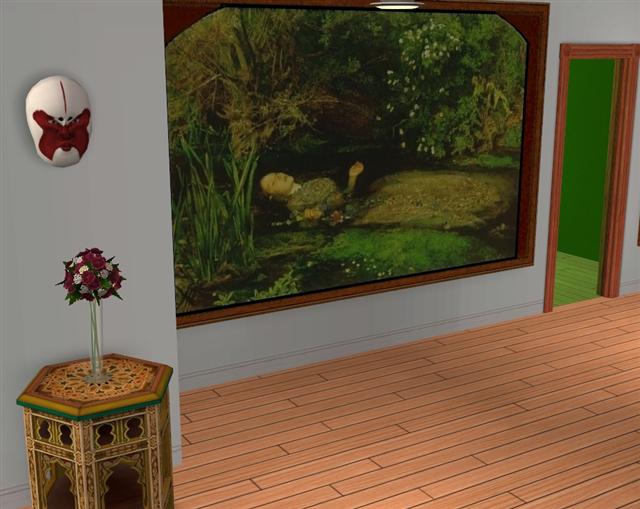 Millais' "Ophelia" (1851-1852), transforms Shakespeare's mad character into one who seems full of untamed wildness rather insanity, a watery free spirit that harmonizes with the textures of greenery surrounding her.

"The First Anniversary of the Death of Beatrice" (1853-1854) and "Dante's Dream at the Time of the Death of Beatrice" (1876), both by Dante Gabriel Rossetti, have already been uploaded in base game format here. However, I thought that both were well suited to this larger canvas, particularly "Dante's Dream", which is over ten feet wide in its original form. 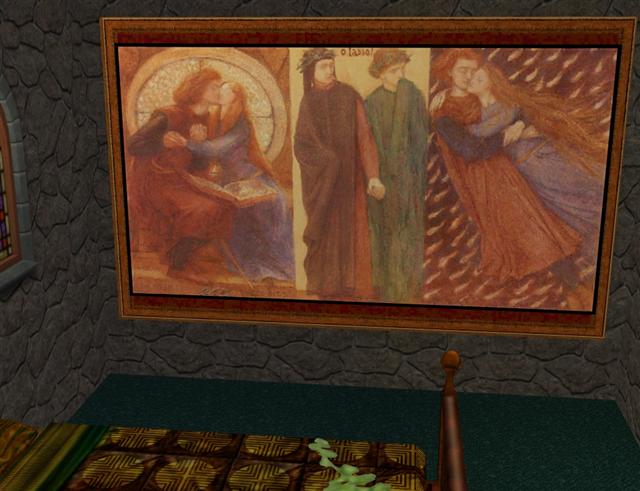 Lastly, Rossetti's "Paolo and Francesca Da Rimini" (1855), recalls a scene in Dante Alighieri's Inferno, in which Dante and Virgil witness the fate of these two adulterous lovers, to be blown about in a violent storm of passion. In this depiction, Rossetti has added fire to these winds of hell, but the two lovers seem quite content to burn together in them.

These images are all in the public domain, and were sourced from the Art Renewal Center. Each was reduced in size from the originals without dimensional distortion, and inset into a red textured mat to fill out the aspect ratio where necessary. You may include these recolours in any uploaded lots, whether for free or pay - but it would be nice if you included a credit in the description and sent me a PM. I would prefer that you not upload these files elsewhere, if only because such duplication can cause confusion.

SimPE 6.0, the primary tool!
Corel WEB.PhotoPaint, for picture frame manipulation and texturing
Microsoft Photo Editor, for adjusting contrast, brightness and size
Recolouring Objects with Object Workshop (NEW tutorial) for its step-by-step helpfulness
Attribute Change 5.30 is very useful for adjusting a file's date and timestamp, used to put the recolours together in consecutive order, with the most recent recolour being the one furthest to the left. Thus the paintings are arranged in alphabetical order within the catalogue popup display from right to left.