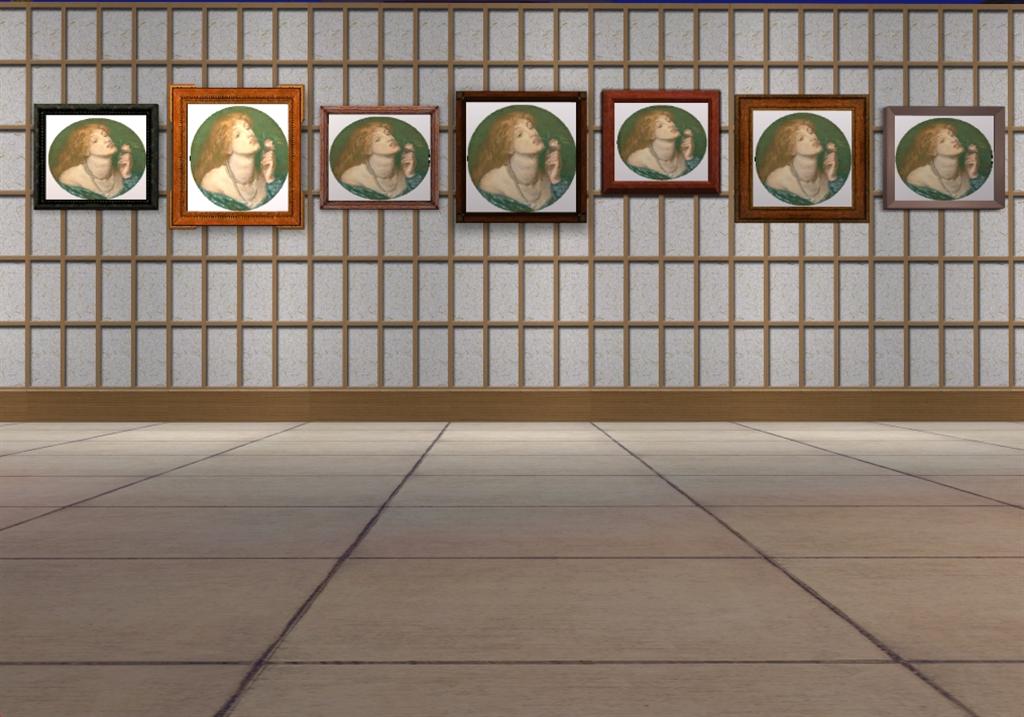 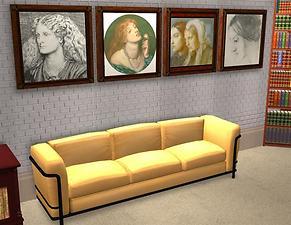 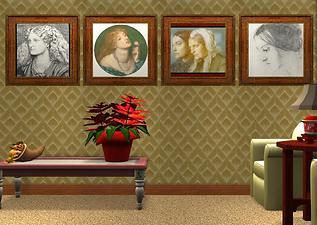 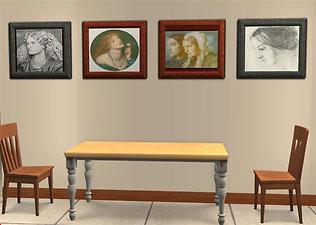 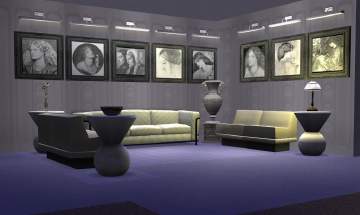 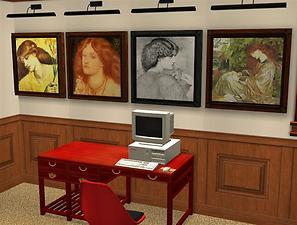 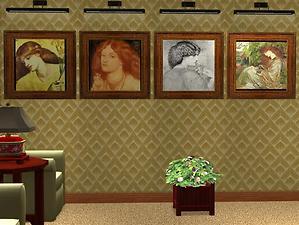 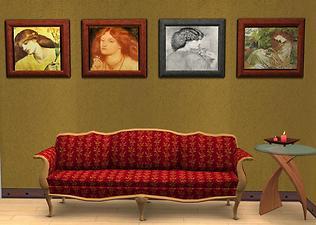 88 Thanks  Thanks     6 Favourited
This is a Maxis Recolour which means that it is a recolour of an item that already exists in your game. Please check the Expansion pack requirements to see which game pack it recolours.

Strangely enough, the base game includes seven different framed paintings that are square in shape. I find this is strange because in "real life" perfectly square paintings and photographs are actually fairly rare. I have posted eight of Dante Gabriel Rossetti's artworks in three square formats, as follows: 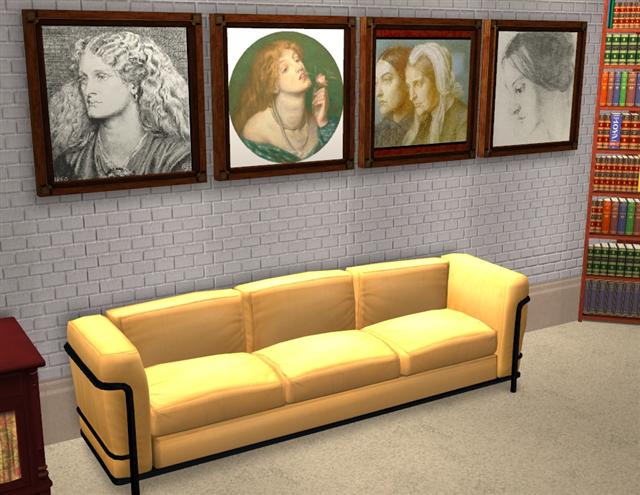 This picture above show the first four works of this collection in Bella Squared format. The first sketch is of "Annie Miller" (1860), one of Rossetti's models, who also modeled for fellow Pre-Raphaelite William Holman Hunt.

In third position "Christina and Frances Rossetti", daughter and mother, appear together. 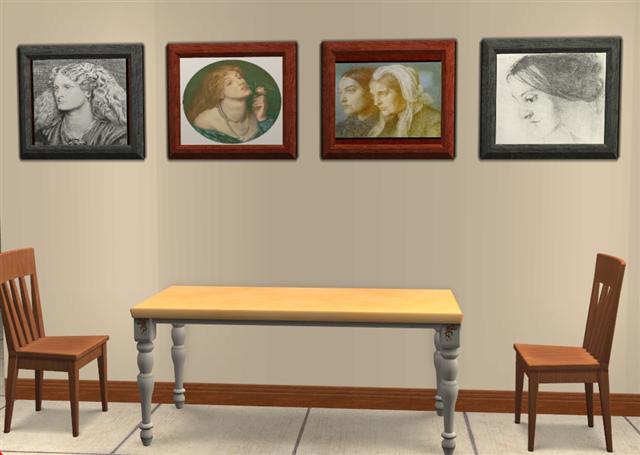 These are the same four artworks as "The Meaning of Fruit" recolours. But note the dimensional distortion that is obvious in the second picture, "Belcolore", something I did not see until I studied this in-game screen capture. I explore this issue in further detail below.

This link shows these works in "Arghist Soldier" format. 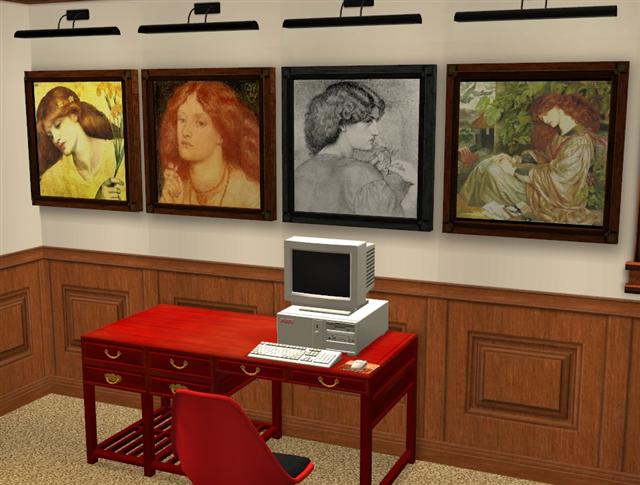 First in this second group, the gorgeous "Sancta Lilias" (1874), also called "The Blessed Damozel", was modeled by Alexa Wilding.

Next, "Regina Cordium" (1860), meaning the "Queen of Hearts" is a chalk image of Rossetti's wife Elizabeth Siddal, drawn shortly after they were married.

Last in this collection, "La Pia de' Tolomei" (1868) takes its subject from the Lady of Siena in Dante Alighieri's Purgatorio. This oil painting was modeled by Jane Morris at the height of Rossetti's passion for her. 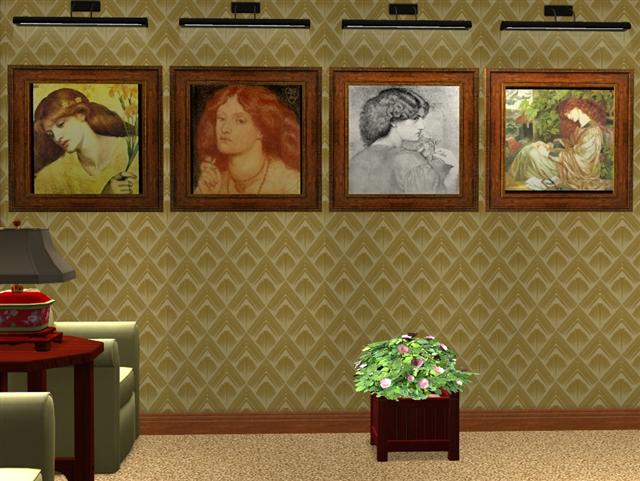 In the picture above, these last four works are shown as "Arghist Soldier" recolours.

This link shows these artworks in "The Meaning of Fruit" format.

As shown here, all these works are also available in greyscale in the "Arghist Soldier" format. In the rossetti_square_grey.zip archive I have also included greyscale picture frames for "Bella Squared" and "The Meaning of Fruit" objects. In the in-game pictures displayed above, I have shown those works that are naturally in greyscale with these particular greyscale frames.

All the base game square formatted pictures are 256 x 256 pixels in size, with the exception of "The Lone Daisy" which is only 128 x 128 pixels. However, as I discovered when I saw the "Belcolore" screen capture as a "Meaning of Fruit" recolour, the game engine does not necessarily display these square images as true squares. Out of curiosity, I converted "Belcolore" to all seven of the base game square pictures, as shown here. From left to right they are "The Lone Daisy", "Red vs. Blue Oil Portrait", "Transcendence", "Bella Squared", "The Meaning of Fruit", "Arghist Soldier", and "Handle and Spout". Note that only "Red vs. Blue" and "Bella Squared" are displayed as true squares. "Arghist Soldier" is fairly close to square, but all the others are noticeably distorted.

I have included these test samples as rossetti_belcolore_extra.zip, in case you may wish to duplicate this experiment. But, with the exception of the "Red vs. Blue" version, I would not recommend using any of these additional recolours in your game because of that very noticeable distortion. Note that "Belcolore" is already included in each of the four main archives.

These images are all in the public domain, and sourced from either The Athenaeum, the Art Renewal Center or the Walker Art Gallery. Each was reduced in size from the originals without dimensional distortion, and with matting used to fill out the aspect ratio where necessary. Where applicable, I used SimPE to set reflectivity to zero so as to maximize clarity. You may include these recolours in any uploaded lots, whether for free or pay - but it would be nice if you included a credit in the description and sent me a PM. I would prefer that you not upload these files elsewhere, if only because such duplication can cause confusion.

SimPE 6.0, the most essential tool!
Corel WEB.PhotoPaint, for picture frame manipulation and texturing
Microsoft Photo Editor, for adjusting contrast, brightness and size
Senesi2003's tiny ceiling light is great for the unobtrusive illumination of the in-game pictures
"Bottomful Floors" by either HystericalParoxysm or dwelliford for the ceiling in the greyscale screen capture
Attribute Change 5.30 is very useful for adjusting a file's date and timestamp, used to put the recolours together in consecutive order, with the most recent recolour being the one furthest to the left. Thus the paintings are arranged in alphabetical order within the catalogue popup display from right to left.