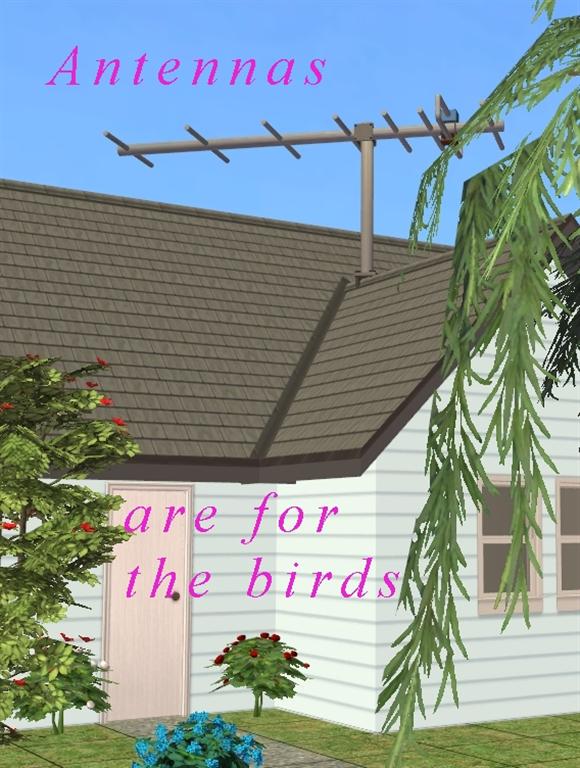 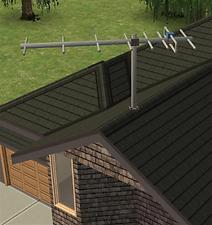 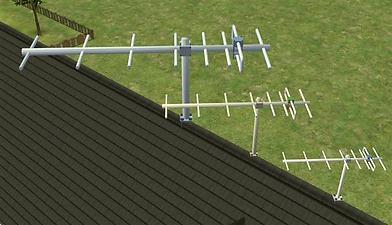 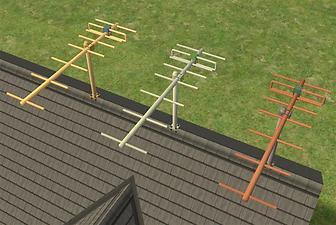 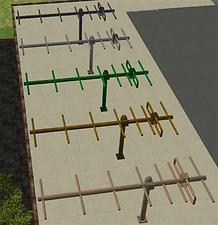 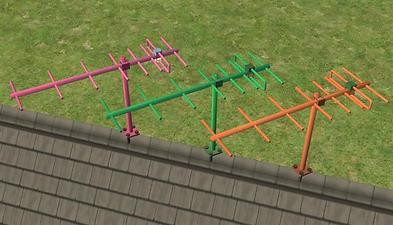 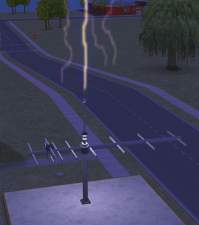 351 Thanks  Thanks     22 Favourited
This is a new mesh, and means that it's a brand new self contained object that usually does not require a specific Expansion pack (although this is possible depending on the type). It may have Recolours hosted on MTS - check below the description for more information.
Title: Universal Rooftop Antenna in Three Sizes, with Slots


Updated January 11, 2008: SDrooftopantenna_master.package, SDrooftopantenna_medium.package and SDrooftopantenna_small.package, the three antenna mesh files, now have four slots to contain accessories and - possibly - FreeTime wild birds. The new index picture shows an evening lightning strike on a large antenna equipped with a light and lightning rod. If you have been using these antennas in the game previously you will need to sell and replace them for these new features to work. Please see Post #26 for details.


Updated January 6, 2008: The files for the three sizes of antenna - SDrooftopantenna_master.package, SDrooftopantenna_medium.package and SDrooftopantenna_small.package - have now been updated to work with all versions of the game. For Base Game through to Pets you will need to use the procedure described in Post #23 for placement on a sloping roof.

For users of Seasons or later expansion packs, you will be able to place the antenna directly on the roof, as before. The antennas have also been made attractive to lightning, now as attractive as trees. However, just as with the Seasons lightning rod, lightning will not strike these antennas if they are placed on a sloping roof. It appears that the game considers that rooftop objects are actually located inside the building, and lightning is not permitted to strike objects located within a building.

If you had the antenna working in your Seasons game before, I am fairly certain you will need to sell it and then reinstall it on your building for the new lightning attractiveness feature to work - which will in any event only work if the antenna is on a flat roof or on the ground.

This is a set of three sizes of rooftop radio and television antennas, based on the Seasons lightning conductor. Each antenna is available in two recolourable groups. The first of these is the Yagi or antenna proper, constructed of eight horizontal elements mounted on a horizontal beam. One of these elements, the driver or dipole located in the second position from the larger or back end, is comprised of an oval loop. The second group, the Accessory subset, includes the horizontal base; vertical pole and clamp; bolts, nuts, and screws; and two flat insulating plates and a square box or "balun" located at the dipole.

Fifteen recolours of each of the two recolourable groups are included in this upload. The picture labeled "Antennas are for the birds" and an additional "AntennaDefault" picture included in the links at the bottom of this post shows the large size antenna system in its default colours.

The large, medium and small antennas cost §194, §193 and §192 respectively, and can be found in the Decorative: Miscellaneous section. 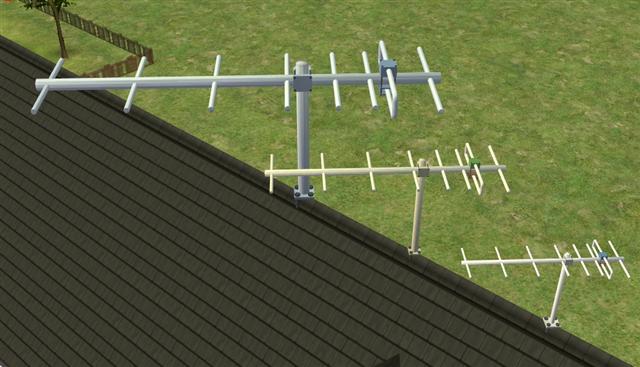 The picture above shows the antenna in its three sizes, shown in the ice, silver and white recolours. Like all these recolours, the "ice" colour on the left is filled with both a linear and radial colour gradient. It is however the only recolour in this collection that does not also contain a texture. As such, it suggests to me that it would suitable for "pure" environments such as low atmosphere space colonies. This textural purity would also make it an ideal base from which do to your own texturing and colouring. 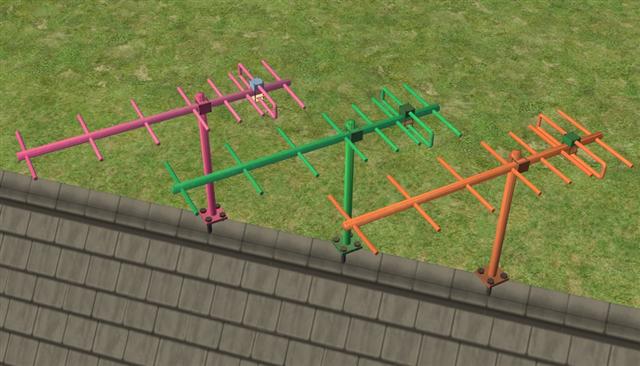 This bright collection shows the medium antenna in pink, green and copper. Yes, that is Barbie pink, sampled from the website. Note that mixing and matching between the recolourable groups can provide some useful variations, such as pink with white, or green with copper. 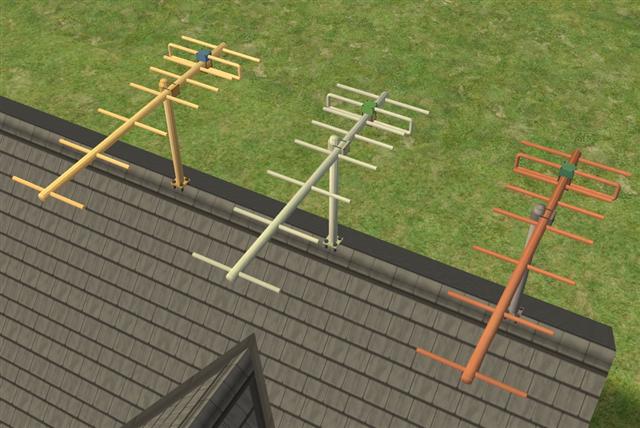 These three recolours of the medium antenna are in gold, light metallic, and bronze. Note that actual antennas have been manufactured in gold, not solid gold but a gold anodized finish. Gold is both highly conductive and non-corroding. 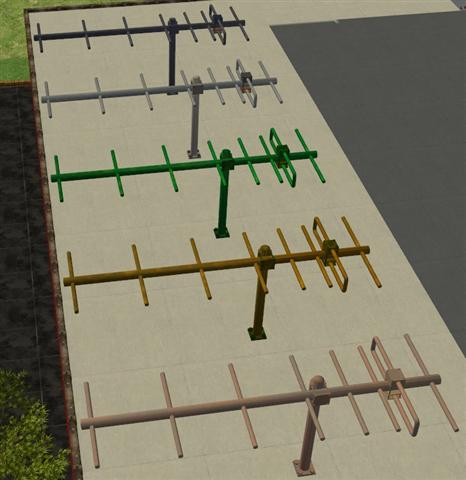 This military/industrial collection shows the large antenna in black, grey, green camouflage, brown camouflage, and weathered. All of these colours tend to blend in with the background, so I used a plain concrete roof so that they could be seen more clearly.

The large size antenna is a scale model, designed to ARRL specifications using this online calculator. This antenna is designed to operate at a frequency of 66 MHz, in the centre of the VHF-Low television band, between channels 3 and 4. The medium size antenna is scaled to operate at 118.5 MHz, the centre of the FM broadcast band. The small sized version is scaled for 193 MHz, at Channel 10 in the VHF-High television band.

These antennas use the Yagi-Uda design, very popular as a television and radio receiver antenna. But the Yagi antenna would also be appropriate for Sims 2 communications, scientific, space and military scenarios, particularly if these somewhat arbitrary scaled size designations are ignored.

The medium and small size antennas use the repository technique to reference the recolours of the large size antenna. Please recolour the SDrooftopantenna_master.package if you wish the smaller size antennas to be available in other colours. I am indebted to the Slave Object Tutorial by IgnorantBliss for making a complex procedure easy.

Mihura has been kind enough to translate the titles and descriptions into French, German, Italian and Spanish.

You may include any of these antennas in uploaded lots, whether free or for pay. You may also make and distribute your own recolours other than in lots, provided that the original meshes are not included. In either case, please provide a credit and link back to this page. It would be nice if you sent me a PM with a link to your creation, but this is not strictly necessary. Please do not upload the original meshes or recolours otherwise than in lots.

If including the medium or small size antennas in lots, please be sure to include the large size master object also, SDrooftopantenna_master.package.

I am willing to take requests for other recolours, and would also consider doing a vertically polarized Yagi or stacked array if there is sufficient interest. But note that the poly count for a stacked array would be close to double that of these horizontally polarized antennas.

SimPE, PJSE, and CEP, which together make it all possible
Milkshape 3D and Ultimate Unwrap3D Pro, for 3D modeling
Corel WEB.PhotoPaint, for texturing and colouring
Microsoft Photo Editor, for PNG file conversion and screen capture cropping
Numenor's BaseGameStarter Pro and AnyGameStarter, so handy speeding up the development process

Each antenna size contains 4142 faces and 3346 vertices. For a model that takes up over eight tiles in its large size, this is actually quite moderate. In many typical applications, only one antenna will be used per lot.