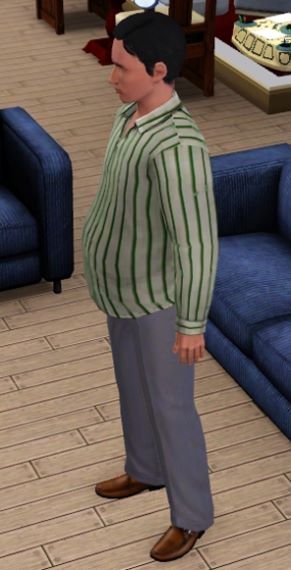 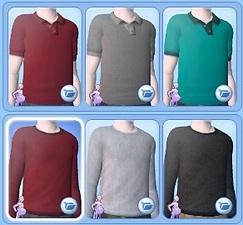 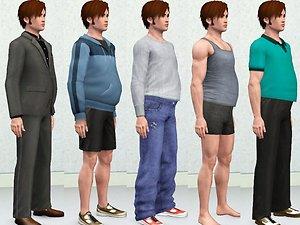 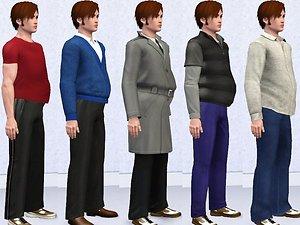 2,426 Thanks  Thanks     446 Favourited
This is a new mesh, and means that it's a brand new self contained object that usually does not require a specific Expansion pack (although this is possible depending on the type). It may have Recolours hosted on MTS - check below the description for more information.
It took a lot of work, but here they are - pregnant morphs added to 10 items of male Sim clothing. Now your Sim guys can have a baby bump that grows as the pregnancy advances, and disappears after the birth.

Pros: Well, obviously pregnancy clothing for the guys that works the same way as for the women and doesn't replace or otherwise affect the normal game outfits. The nude body actually works, and looks pregnant. There are enough items of clothing to provide at least one possible outfit for each category. The baby bump becomes noticeable and gets big at about the same rate as for the females, depending on the length of pregnancy you're playing.

Issue: Sometimes the game seems not to recognize the changed body shape and the Sims have an alarming tendency to stick their hands inside their bellies.

If you have my previous male pregnancy meshes, please delete them before using these. It would also be a good idea to delete your cache files the first time you use them.

As of V2 and up, these are separate clothing in CAS with custom thumbnails with a pregnancy icon to make them identifiable. This way, pregnancy outfits can be planned in advance.

Are these compatible with WA/Ambitions/Late Night/XXX expansion?
Almost certainly, yes. Unless the basic way the game handles morphs changes, there's no reason they wouldn't be compatible. Please try it, find out, and don't ask unless there's a problem. Sorry, but I'm getting VERY tired of seeing the same question on every morph-related mod I've done every time a patch or expansion comes out.

But they don't work!
They do work. They've been tested with base game and all the expansion packs up through Seasons. If they don't work, chances are it's your custom content setup that's not working. Before you post a question here, verify that other custom content is working in your game. If your setup is not working, there are help pages and help forums on this site. This is not the place to post about it.

But I'm not getting 'Try For Baby' for male/male couples!
That's not what this mod does - it only provides clothing for males after they get pregnant. For enabling male same-sex Try For Baby, the best mod I know of is NRaas Woohooer: http://nraas.wikispaces.com/Woohooer

Additional Credits:
The contributors to SimsWiki for info that got me started figuring out the morph structure

Echo for Postal
P L Jones for S3PE Wes H for his Milkshape Plugins
Delphy for this site!

And a big thanks to my first Sim model, Eric, for going through 324509654 pregnancies while I was testing this stuff.

- Five new items of clothing added. (Tank top, boxer shorts, relaxed jeans, polo shirt, cardigan)
- All lod1 and lod2 meshes have been reshaped to conform more closely to the female pregnant morph, both for aesthetics and to reduce the issue of overlap with hands, objects, other sims, etc.
- The issue of gapping between the nude top and some of the pants has been fixed.
- All clothing is fully plannable. They will appear as additional items in CAS, can be chosen and personalized before pregnancy, and will be worn during the pregnancy.
- Custom thumbnails are added with a pregnancy icon to indicate which are the pregnancy-enabled items.
- Available as separate packages for those who want to pick and choose, and as one combined package for those trying to reduce their number of packages.

** Update 12/21/2012: It must be the end of the world because I've uploaded V3. Changes:
- Full support for Seasons, with several items enabled for Outerwear.
- Five new items of clothing added. (Base game: Trenchcoat, puffy vest, casual slacks, and hoodie; Seasons: Snowboard jacket)
- All clothing is fully plannable as before with custom thumbnails and presets.
- Available as separate packages for those who want to pick and choose, and as one combined package for those trying to reduce their number of packages.
- The Seasons jacket is in a separate download since it won't work unless Seasons is installed.


Let me know of any problems!

If you need more info, see:
Back to download view
224 Comments / Replies (Who?)