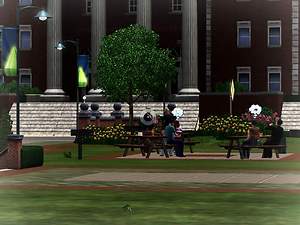 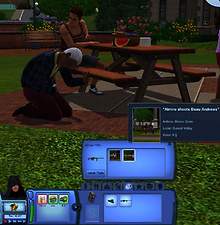 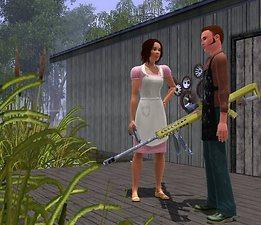 Picked Upload! This is a picked upload! It showcases some of the best talent and creativity available on MTS and in the community.
Last code update 2012/11/16

This mod allows the use of firearms that can you can aim and shoot, killing your least favourite Sims...
It uses the WA camera interface to aim, but instead of taking a picture, it can kill the Sim in the scope.
It supports long range rifles, so you can use the full zoom to snipe out distant targets. Installation
The download includes:You need to install the WeaponsLib package plus the weapon object packages you would like to use.

In the game, you can find the objects in buy mode under Entertainment / Hobbies & Skills. The Riffle costs 1600, the Pistol 499. Features
This Mod contains the following features:Each weapon has an associated damage, and depending on the precision of the shot and distance of the target, it will inflict more or less damage. The damage will be taken out of the Sim's energy (injuring him), or if the sim runs out of energy, he will die. Weapons can have piercing ability - a Long Range Rifle can kill up to 3 sims with one shot if you line them up right.
Some weapons can use "knock out ammo", like tranquilizer darts, which will put the Sim to sleep rather than killing him (although an overdose of tranquilizer might eventually be deadly).
Witnesses in the same room and near the shooter have a chance of calling the police, in which case you'll get arrested and loose your job (except if in a criminal career).
The shooter, witnesses and victims will get mood/buffs effects (like Horrified, CreepedOut, FiendishlyDelighted, etc) depending if they have evil or good alignment.
Vampires will only die with wooden ammo, mummies with fire weapons, simbots with electric weapons, werewolfs with silver bullets, etc.
Pets can also be "put to sleep"...
You can shoot some objects, producing several effects depending on the object type. If the Ambitions EP is installed, some objects might explode when shot with a powerful weapon or explosive ammo.
Currently shootable objects: All Repairable or Cleanable objects (will get broken or dirty), Lights, Insects, Toys, Fireworks, Boulders and Gravestones/Urns.

This can also be used with NRaas' Mobster career and Assassination skill, so you can have hitman jobs and assassination opportunities.

Uninstalling/Upgrading
Before removing or updating the mod, sell all weapons your sims might be carrying in inventory and save the game.


Extensibility
I have structured the object script code in a separate package file (WeaponsLib), so that if anyone would like to make additional weapon objects meshes, they would just need to set the object script field to one of the weapons available in the lib package, and it would automatically adopt the behaviour of the selected weapon.

- The lib supports a few more weapon types, and it would be great if someone could make different weapon objects, like Shotguns, Dart guns, Tasers, Crossbows, RPGs, etc...


If the game is in cheat mode (by pressing ctrl+shift+c and typing "testingcheatsenalbled true" in the console), there will be additional interactions if you do shift+click on the weapon:These interactions are NOT available when the weapon is in the inventory! The weapon needs to be on a surface or being carried on the sim's hand.


Localization
Currently this mod is available in:Some of the new interactions I translated via google translator, so let me know if some are incorrect...
All other language resources are in English. If anyone would like to translate into other languages, let me know, and I'd be happy to include it.

Special thanks to XanKriegor for the great weapons meshes, and to ChaosMage, Ani and Kolipoki for unveiling the possibilities of object Modding.

See: Game Help:TS3 CC Basicswiki for a full guide!
Back to download view
1322 Comments / Replies (Who?)