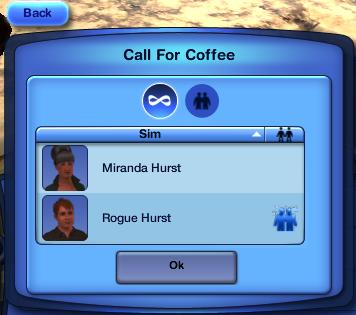 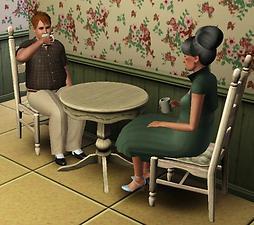 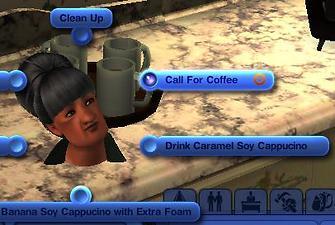 I'm a coffee person and in TS2 it always bugged me how you couldn't sit and have a nice cup of coffee with your guests because there was no way to tell them to have a cup. Not until we got the tea set from BV that we were able to drink and socialize outside of the bar, and so the tea set quickly became my favourite object in the whole game.

This picture pretty much sold TS3 for me, because I thought that finally, we can sit and have coffee and socialize, unfortunately that was not the case at all as we now know.

What this mod does
- It will replace the "Serve Hot Beverages" interaction in the coffee machine with "Serve Coffee" (if you are a party animal/evil/good the name is the original name, the reason I changed the default name was because I wanted to see the word coffee somewhere).

- A new interaction will appear to all served trays of coffee called "Call For Coffee". This will open a Pie menu picker with all the sims on the lot, from which you can select up to four people to come and take a cup.

- A cup of coffee costs 10§ if you drink it on a community lot (through the new interaction or the normal ones). If the lot is owned by a Sim, the lot owner gets the money. Every Sim who drinks, pays. But you will see the money animations only for the active household. There is no pop-up telling that the owner earned money from the coffee, because in this case it's kind of trivial info, so I left it out.
- I implemented the rabbit hole lot owning rule, you can read about it in here.
- A Sim will no longer automatically take a cup of coffee after serving a tray.
- The default time for drinking coffee is 15 minutes, I changed it to 30.

Changing the drinking time
- Open the mod in S3PE.
- Select the xml named HotBevarageMachine.... and press the notepad button
- Modify the following value


Translations: I don't translate my mods any more. But I will always add the STBL files if you want to translate/change the texts for your own game.

Compatibility: This will clash with mods if they have done changes in the coffee machine/eating codes. But so far I have not seen any conflicts.

Bugs
None to my knowledge, but if you find anything, please tell.

See: Game Help:TS3 CC Basicswiki for a full guide!
Back to download view
86 Comments / Replies (Who?)