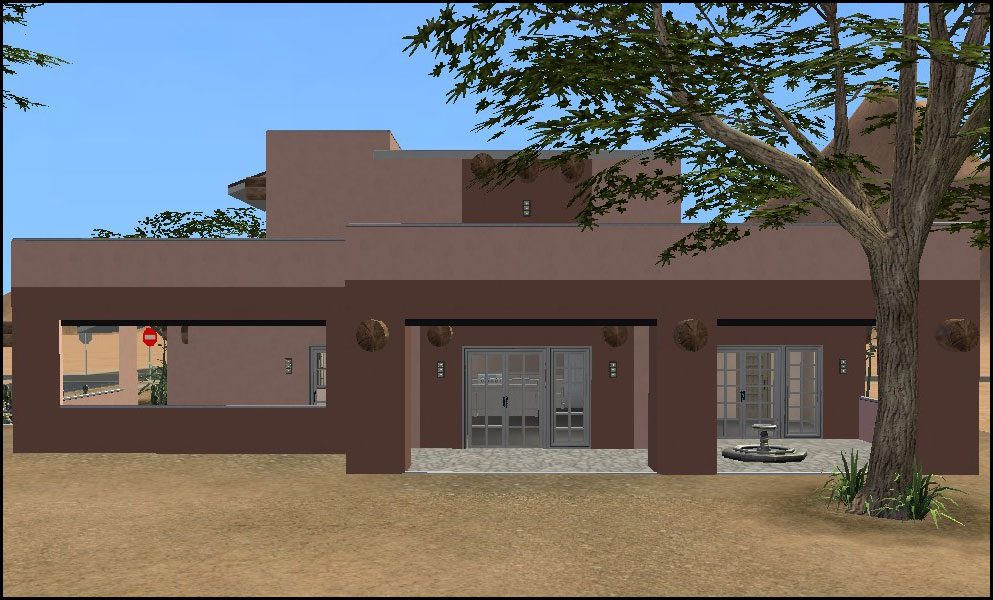 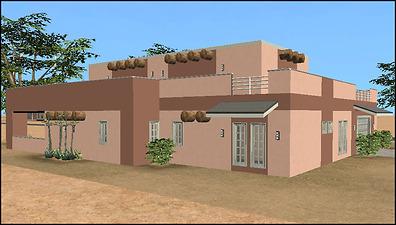 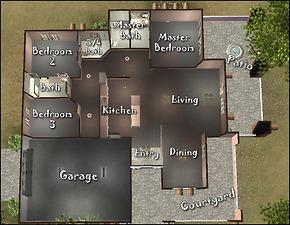 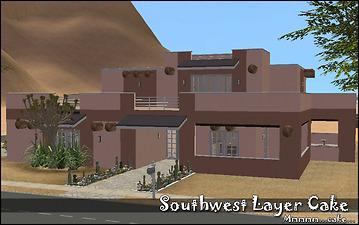 Yeah, the so-called "Southwest Contemporary" style, which is what this is, always makes me think of square, layered birthday cakes. The fact that this one is a total of three different shades of pink (including the interior pink) probably doesn't help this kind of thinking. *laughs* So: Price: $67,831
Much of the cost, I imagine, is in walls, since there are three stories worth of them here (one chopped down via CFE), plus a ton of half-walls.

Lot size: 4x3, which is about the biggest I go.
There is some space left over on the right-hand side. So if you wanted to, you could add stuff that I, personally, can't be bothered with. Like a pool, for instance.

Three bedrooms, including the master.

Three bathrooms: One full family bath, 1 3/4 private ensuite attached to the larger of the secondary bedrooms, and the private master bath.

A big, open "great room" encompasses the foyer, living, dining, and kitchen areas. But once furnished, it's not so huge that your Sims seem to get lost in it. Because I really, really hate that.

There's an attached sideways garage that works in a teleporting/animation-less kind of way. However, it means that you have to stick this puppy on a corner lot, specifically one where the surrounding roads form a proper "L" shape, in order to use it. Or at least, I would assume so. But even if the garage/driveway would work on a not-corner lot, it'd look really stupid.

Two outdoor living areas: A covered, half-walled front courtyard which is accessible from the front walk and the dining room, and a covered side patio accessible from the great room and the master bedroom. The latter has a little fountain, just because, but it's also a nice spot for a hot tub. Plus there's a gigantic roof, if you make it accessible.

Some less-important details, in no particular order:

1) What looks like a second floor actually...uh, isn't. At least, not as it stands "out of the box." It's unpartitioned, has no floor, and is purely "decorative." The reason is that a CFE'ed, 4-click-high "dummy level" -- created pretty much solely so that I could have the narrow horizontal stripe of darker plaster on the exterior -- sits between it and the living space below. Now, I know that the "second floor" can be made into usable space because I've seen it done. The space would make a great game room/party room. Or more bedrooms if you need them, maybe make a truly sumptuous master suite. Plus, if you do that, then you will have tons of roof access. You could even put a sunken hot tub up there, since the squashed CFE level will prevent the tub from eating a hole in the ceiling below it. But I don't know how to do it and, to be honest, wasn't really interested in figuring it out. I just wanted the "second floor" to be decorative, since I greatly prefer one-level Sim houses. Feel free to mess with it, of course.

2) There's not too much in the way of landscaping. It's the desert, so things are not generally "lush." The ground, however, is 100% terrain-painted to make it look sort of like how the ground looks in the real Santa Fe area of the US, which is part of my stomping grounds. (Hint: Think dirt, dust, and rocks, not sand. And grass? Hah! Hah hah! HAHAHAHAHAH...!) Nothing really needs maintenance. The cacti lining the front walk will die if not watered, but they don't look that different when dead. And they won't generate weeds because I have "cleverly" sat another small "plastic" cactus on top of each square, which I have discovered appears to prevent weed generation and seems to stop neat Sims from autonomously disposing of dead plants. So if you want to ignore the front cacti, you can. Unless you want the Garden Club to love you, of course.

3) As usual with my uploaded lots, you have a fully-fitted kitchen and 3 fully-fitted bathrooms. You have light fixtures in each room and mirrors in each bathroom. You have a phone. And that's it. For me, Interior Decorating = Total Fail.

4) Other than an invisible driveway extension piece, everything you see on the lot here is included. However, please note that all of the windows and exterior doors except the front door on this lot are from Moune999's Torrox build set. It's a repositoried set, the master of which for the doors and windows is a two-story window...which I didn't use on this lot. So, if you don't already have it, I've added it to the rar file separately but it is NOT in the package. You'll need to separately copy that file into your Downloads folder or else you'll have a lovely shade of flashing blue all over the place, and it won't be a very purty sight. I've also separately included Moune's white recolor that I used, in case you don't have it.

5) The white border used on the full walls of the top level of the house is also part of the Torrox set, and it refused to package. So it, too, is in the rar file separately.

6) White-trimmed little rooflets scattered about = not CC. I have default-replaced all of my Maxis roofs so that they have white rather than grey edges, using this mod by Phaenoh. I highly recommend that you do the same. It's not totally crucial for the look of this particular lot, but...it just looks better, in general.

7) Since CFE was involved in building this thing, I'm going to guess that it won't be as easy to alter as you might like. So, bear that in mind in your decision as to whether or not you want to download it.

And that's it...finally. For those of you with desert neighborhoods, as I'm currently building/playing...Well, for all of my poking fun at it, this is actually a nicely-playable lot for its size, originally built for the richest family in my desert neighborhood. If you need a lot in this kind of style, I hope that you might get some use out of it.