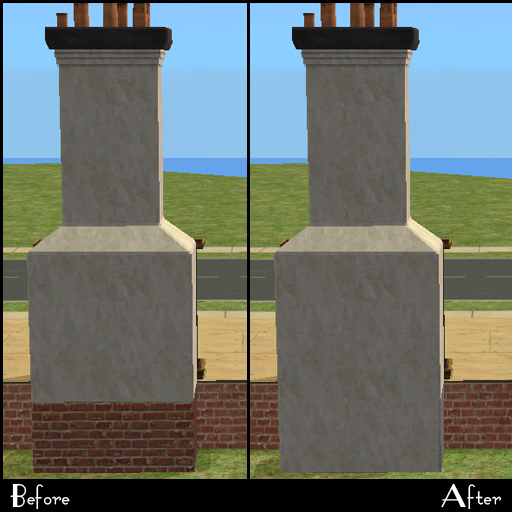 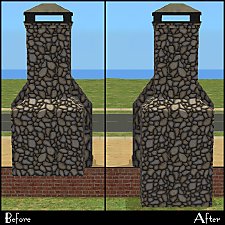 Picked Upload! This is a picked upload! It showcases some of the best talent and creativity available on MTS and in the community.
The base game fireplace chimneys were all made recolorable by Numenor in the CEP. When the Pets, BV, and AL EP's were released they each brought a new fireplace, but with chimneys that didn't use the base game chimneys so they are not recolorable. This will make all three of those added fireplaces have recolorable chimneys, and in some cases fix some mesh mishaps by EA.

LaBoheme Fireplace- Requires AL
This fireplace is an oddity. It has it's own chimney, with it's own texture, but it uses the foundation chimney piece from base game fireplaces. So this has been modified to have it's own base piece that is slaved to this fireplaces chimney, which is now recolorable. I have also made the top small pieces and the top cap have two recolorable parts, one for the chimney and one for the cap/decorative bits. Mountain Fireplace - Requires BV
This one really made me go wtf EA? This one also has it's own chimney, but there was no base with this one! So I added a foundation base to this one and slaved it to the fireplaces chimney, which is also recolorable. Ignito Fireplace - Requires Pets
This fireplace just had the default chimney pieces so I slave them to the body of the fireplace instead. Any recolors of the fireplace will automatically be available to the chimney pieces. The package includes two of the original textures included that have been modified to fit the mapping of the long chimney piece, otherwise it had an invisible spot.

Recolor Notes:
I noticed when making test recolors that SimPE was incredibly slow pulling all the recolor files, so please just be patient with it if your system is less than spectacular. Also when you recolor it will pull ALL recolorable parts and not just the chimney. Just tick/untick what you want to recolor.

Installation:
Place in your zCEP-EXTRA folder.

Additional Credits:
Numenor for paving the way to recolorable fireplaces and a whole lot more.

I found that if you open the _HL_CEP_FireplaceXX.package file before recoloring, then SimPE will load the required textures just fine. You MUST open the CEP file for the specific fireplace you want to recolor first. This puts it in the cache for SimPE which is letting the OW read the files. I have no idea why it's doing this, and I have no idea how to get SimPE to read this properly otherwise.

Place in your zCEP-EXTRA folder.
Please make sure to read it before commenting that it doesn't work. :)

3. Place in your zCEP-EXTRA folder.