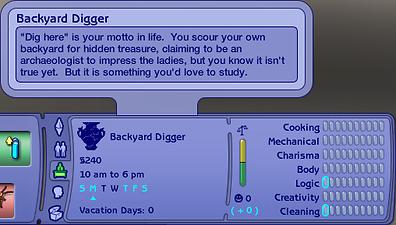 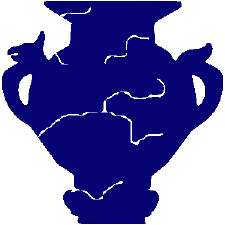 Such came into my inbox. While I don't take requests as such, I do take suggestions, and that tickled my fancy. Having never seen Tomb Raider, though, it was a bit confusing, but I drew on my knowledge of Indiana Jones, The Mummy, National Treasure 2, and a dash of Doctor Who (specifically River Song and Bernice Summerfield). I rather like the way it came out.

Backyard Digger
"Dig here" is your motto in life. You scour your own backyard for hidden treasure, claiming to be an archaeologist to impress the ladies/guys, but you know it isn't true yet. But it is something you'd love to study.


Student
Read this, take that test, listen to this lecture...most people would shirk from the sheer amount of studying you're piling onto yourself, just hoping to get that summer internship with Professor Jones...keep it up, and who knows?


Intern
Wow! You actually got that job interning with the local university's archaeology department! Still, it's not quite what you were expecting--you're mostly a paper pusher ("paperwork" is not in Professor Summerfield's vocabulary). Perhaps one day she'll let you do something a little more exciting.


Dig Site Finder
You'd better be good at reading maps, because now you've been put in charge of scouting for dig sites! Though sadly, the photos you get in the post are the closest you'll get to treasure. Perhaps you could charm your way into helping?


Assistant
When Professor Song asked you to accompany her to the farthest reaches of the Earth, you jumped for joy and instantly agreed. Now you're her assistant with all that entails. Which is mostly holding stuff. Get your brain in gear and you just might get to work alongside her!


Partner
Now that you're a whole half of an archaeology team, you get to make decisions that could change the way we view history, even though--annoyingly--you still have to share credit for your discoveries.


Junior Archaeologist
You're in charge now, and the power feels great. You still play by the rules, but you come home with the knowledge that you have expanded every Sim's mind with what you've uncovered.


Field Archaeologist
You've learned that following all the rules sometimes means losing a valuable piece of history, and that begins to irritate you. And so, you've decided that most of the little rules are for bureaucrats and sissies who have never read a history textbook in their life. Some people admire this and send you on tricky missions where red tape would prevent you from reaching your goal.


Professional Archaeologist
Your quest for knowledge overrides any respect for the law, especially the big, history-altering stuff. You're known world-wide for your ability to "aquire" lost artifacts, and no one asks too many questions about how you get them. Besides, you tell yourself, history shouldn't be dictated by politics.


Professor of Archaeology
From the darkest temples to the lost city of Simlantis, from dodging military bullets to running from booby traps, you've seen it all and done it all, bringing back artifacts which rewrite the history books. Your name is now permanently etched in time as the Sim Who Made Us Rethink the World.

-------------------
I determined the wages based on an average of the Science, Military, and Athletic careers. The logic for some of the higher levels having night shifts is that there's no guarantee your quest for history will keep you in the same time zone. In fact, it probably won't.

The main skill required is logic, with body in second place.

Things seem pretty normal until you get to job level four. That's when things get weird in the chance cards. Mwahaha. Like The Mummy weird. From there on out, it's gone fantasy.

Enjoy and I hope I've done it right!

Additional Credits:
Bidou's Career Editor SimPE Adobe Photoshop 6
all those archaeologist movies/books/TV shows
Clker.com for the base image I used for the icon (the base for the vase! Haha!)