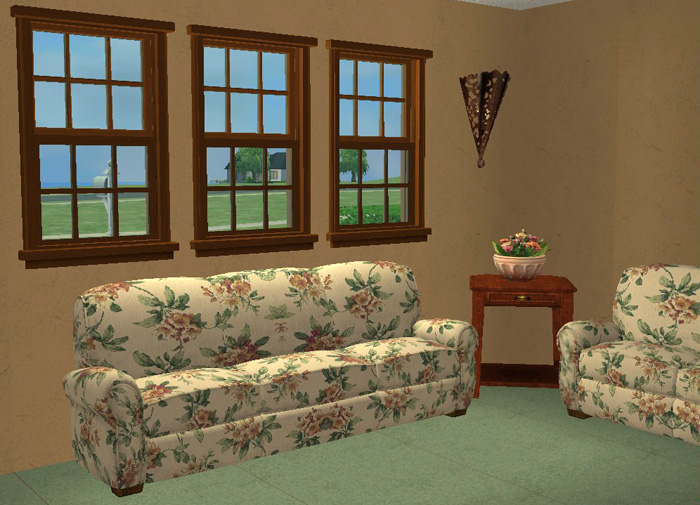 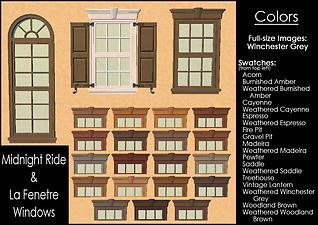 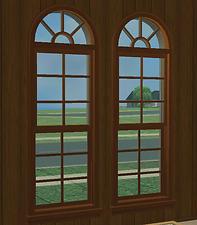 841 Thanks  Thanks     49 Favourited
This is a Maxis Recolour which means that it is a recolour of an item that already exists in your game. Please check the Expansion pack requirements to see which game pack it recolours.

MOAR WINDOWS! Because you know you want them.

So yes, these are the base-game Midnight Ride and La Fenetre Windows, the "colonial" ones, recolored in my 20-color wood palette. They're kind of a "two-fer" because the La Fenetre windows, both the double-hung ones that are the same as the Midnight Ride windows only with shutters as well as the tall arch-top ones with and without shutters, all use the same textures as the Midnight Ride windows for their frames. However, the shutters use a different texture image. Go figure.

So, what you have here is a recolor of the Midnight Ride window and a recolor of just the shutters of the double-hung La Fenetre window, which serves to recolor everything Midnight Ride or La Fenetre, including all of Leesester's fab expansion/completer pieces, which you will want if you don't already have them. (There are too many to list; off to her profile with you!

) Both recolor sets are included in the one rar file because I think it'd be kind of dumb to have the frame recolors but not the shutter recolors, yes?

Anyway, here are the colors, which will be familiar to you by now if you've been looking at these sets: The pics that I chopped up to make the above image were taken outdoors on the sunny side of a wall. On the shady side of a wall or indoors the colors are richer. To wit, here's the Treehouse color on the arch-top La Fenetre window: And here's the Fire Pit color on the Midnight Ride window: And that be about it! As usual, the files are already Compressorized to make your Downloads folder happier with me and with you, and they are all clearly named so that you can easily jettison the items you don't want/need. Happy building!

PS: The floral recolor of the Club Distress sofa in the pic above is from an upcoming set. I...uh, kinda went hog-wild on floral patterns on various Maxis sofas and other stuff.

So, if you like floral prints on stuff, be on the lookout...