Furniture What Matches: Part 2 of Far Too Many 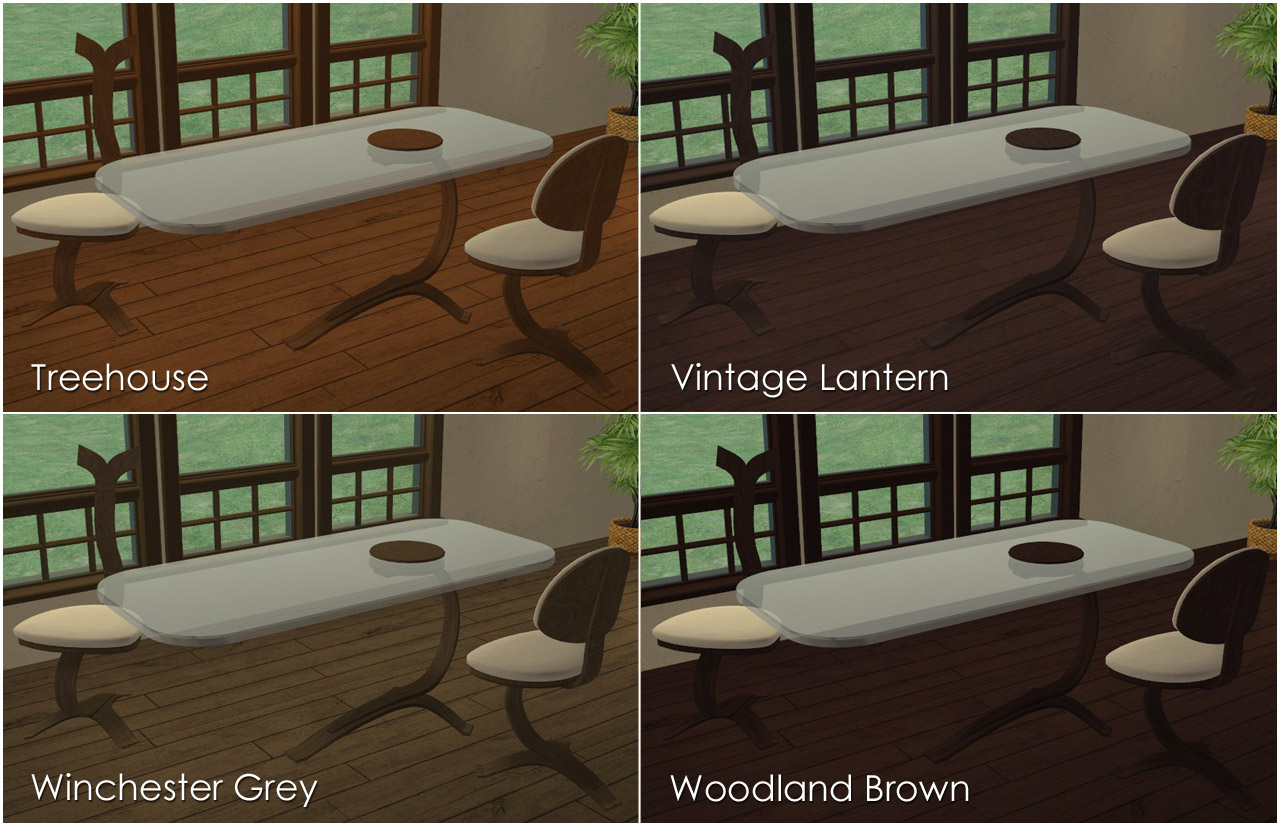 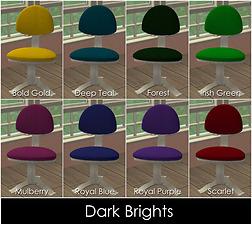 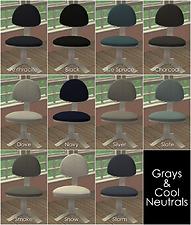 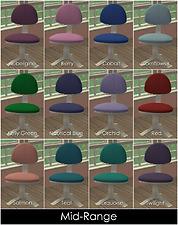 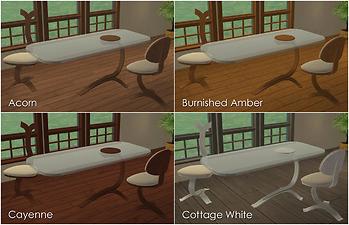 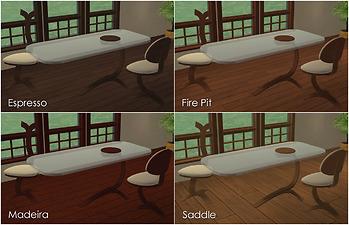 561 Thanks  Thanks     31 Favourited
This is a Maxis Recolour which means that it is a recolour of an item that already exists in your game. Please check the Expansion pack requirements to see which game pack it recolours.

Another dining set that matches...although in this case EAxis makes life a little easier for a systematic recolorer like me by linking stuff logically, OMG! In this case, one single set of files recolors the wood parts of TWO chairs AND a dining table from the base game, specifically the "Stark Inspiration" chair, the "Plasticity NodePod" chair, and the Milano Royale Dining Table, which the game internally calls "Loft Dining." Glory be!

So here are those three pieces in four of the colors of my 12-color furniture wood palette: The other eight wood colors are attached in similar pics. I had a bit of fun with the grain patterns on these, since there's little wood to speak of on the pieces anyway. Each one is different and each is more randomly wavy/swirly than I usually make them. You can see it especially on the backs of the chairs. I only recolored the wood base of the table; the glass already comes in three different tints, which I think is sufficient.

But then there's the other aspect of the chairs: The cushions. Oh, dear. If you looked at the Oaktowne chairs that I referenced in my last post, you already know what you're in for. Otherwise...

See, in order to make things maximally mix-and-matchable, I figure that a uniform upholstery color palette is needed, too, for those pieces which have upholstery. So...Yeah, I made one, which is mostly geared to coordinate with the colors with which I tend to Sim-interior-decorate most often. (Generally meaning: There's a lot of neutrals and muted colors, mostly on the earthy/autumn-y side. But there are other colors in there, too.) Specifically, there's a nice, even 47 colors, further grouped into four subsets of sort-of related colors. Here, about half-way down this LiveJournal post of mine, you can view simple swatches of all the colors. (And, incidentally, the fabric pattern, which is, in fact, one of EAxis's fabrics for these very chairs; I've simply recolored and applied it to everything since it's nice and subtle but a step above plain solid color.) But here are pics of the "Stark Inspiration" chair (which I often use as a desk chair) with the cushions in the colors that I call "Mid-Range," with three other similar pics for the other three color subsets attached: There are separate downloads for the wood and for the cushions, if you should want one but not the other. In the cushion download, within the rar file there are folders for each of the color subsets, so if you like only, for instance, the earthtones, you can just extract those and forget the rest. There's also a folder containing just copies of the fabric swatches, for your reference while weeding out colors. You can, of course, delete those when you're done with them. (Or, you know, keep them on hand for future downloads in this series.

As always with my stuff, the files are pre-Compressorized for the (relative) safety of your Downloads folder, and all files are clearly named so that you can easily jettison those files which you do not want.

I hope that you'll find these useful! Happy Simming.