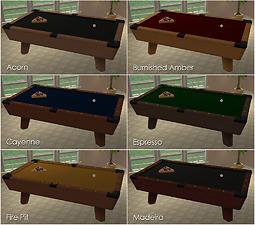 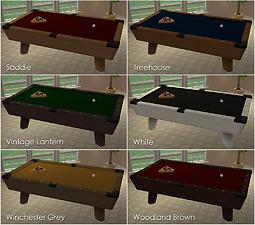 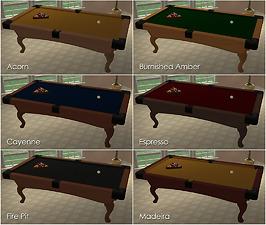 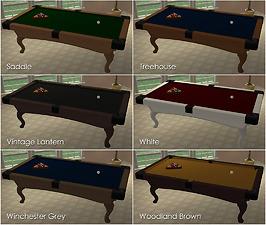 396 Thanks  Thanks     15 Favourited
This is a Maxis Recolour which means that it is a recolour of an item that already exists in your game. Please check the Expansion pack requirements to see which game pack it recolours.

And now for something completely different! Because I like pool even though I hopelessly suck at it, I tend to put pool tables in my richer Sims' houses, which tend to have recreation/game rooms and sometimes even actual dedicated billiard rooms. And as usual, I became irritated with EAxis's colors, both in terms of the wood and the, IMO, too-light/bright felts. So...here we are.

I recolored the "Corner Pocket" table from University and the "Side Pocket" table from Free Time (but not the Apartment Life table because I don't like its shape/textures and never use it). So, you will need either University or Free Time or both, depending on what you choose to download. These actually use the same texture files but aren't linked, which I guess makes sense given that they came from two different EPs.

For each table, there's a white version plus 11 wood colors from my wood palette, the same ones I've been recoloring furniture in. (Just because it's convenient, not because I think that your pool table necessarily needs to match your dining room table.

) And then there are the same five new felt colors for each table.

Here are six of the Corner Pocket tables, with a randomly-chosen felt color for each and the other six colors attached: Here are six of the Side Pocket tables, same deal: And here's a top-down pic of the Corner Pocket Table, so that you can see the felt better, along with samples of the other new felt colors culled from similar in-game pics. They're the same for both tables:

And in the case of the Side Pocket table, I made a couple of changes to the texture:

2) I removed some strange-looking shading on the table's legs, which is especially noticeable on EAxis's light color. Here's what I mean:

The only thing that bothers me now is that the ball rack doesn't match the table.

I don't know why on Earth EAxis didn't just make it black so that it would go with any table, in that it would match the pocket cups for most of their textures. That's what I would have done, and I would gladly recolor it myself...except that I can't find the stupid thing in SimPE anywhere!

But if I do find it and can recolor it, I'll do so and update this post.

Anyway, as always, all of the files are pre-Compressorized and clearly named so that you can more easily get rid of the colors you don't want. In each download, the felt colors and the wood colors are RAR'ed in separate folders, so if you should want one but not the other, simply extract only the folder you want. I'm not sure how often people use pool tables on their lots, but if you do tend to use them...there you go.