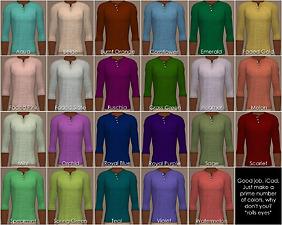 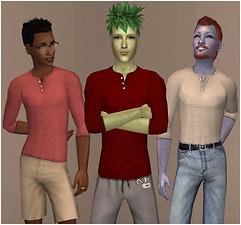 539 Thanks  Thanks     39 Favourited
This is a Maxis Recolour which means that it is a recolour of an item that already exists in your game. Please check the Expansion pack requirements to see which game pack it recolours.
And now for something really and truly completely different! Yes, if you've ever read my profile/policy, you may have seen how it says that I have no interest in creating stuff that goes on a Sim's body. Well, apparently I lied.

But only a little. See, I have mad, mad love for fanseelamb's basic, normal clothing for basic, normal guys. Nowadays, it's pretty much all that my YA/adult Sim guys ever wear. So, very recently, I decided that I wanted some expanded color options on some of fansee's things that I tend to use the most, particularly for my guys who happen to look good in brighter/bolder and/or lighter colors and who aren't afraid to wear them. So...I made some stuff. Thought I'd share some of it, for others who might have Fansee Love.

So this is Fanseelamb's basic henley shirt wih pushed-up sleeves. (Because that's the version I like better, as opposed to the version with the sleeves pulled down.) They're for guys of the YA/Adult flavor. I made 'em in a buncha different solid colors, 23 of 'em, mostly of the brighter/lighter persuasion, plus some dark/bright jewel-y tones, just 'cuz. Plus, I also added a wee bit of texture to the...uh, textures, because I'm afraid I'm a tactile, texture-loving kinda gal.

It makes them look almost thermal-y, although it doesn't show as strongly on the darker colors. They all have the same white-ish buttons. As usual, you can tell that greens of all shades and aqua/teals are my favorite colors and yellow is my least-favorite.

For my "lucky" models, I rounded up and dragged off three of my normal, average family guys from my current neighborhood. (Hey, in my neighborhoods, alienness/supernaturalness IS normal; plain old humans are definitely the minority.) So: Not that it matters at all, but from left to right we have Quinten the recently married-in and sort of good-looking ex-Downtownie, Daniel the slightly manic-depressive gay plant, and Pierce the goofy alien son of Komei Tellerman and the owner of the Universe's Ugliest Dog PLUS 8.6666666666 children. (Family-Sim wife + Three sets of twins = ZOMG!Children!) Pierce's family is one of my favorite families EVAR, so he had to be in the pic or else he would have pouted at me. ANYWAY, they're wearing three of the colors with different bottoms, two of which -- the untucked ones, obviously -- are fanseelamb's, the other Standard EAxis. (Poor Pierce.)

Now, here's a labeled, alphabetically-ordered pic of all the colors, made up of pics of Quinten's torso because he's one of those lucky souls who looks damn good in just about any color: Now, all of this said, please don't think that I'm going to make a habit of clothing-making, because I really have no intention of doing so. Besides the fact that BodyShop annoys the holy living heck outta me, I am A) Fashion-challenged and B) Generally disinterested in clothing, Sim or otherwise. Except, apparently, when it comes to stuff for SimMen because they seem to get short shrift, both from EAxis and from the people who make CC clothing. You can find tons upon tons of great stuff for the gals, but it seems to me that it's hard to find good-quality, not-"alternative," not-high-fashion, not-teenagery stuff for the poor menfolk. (Not that I have anything against those things, mind you. It's just that most of my pixel men are average Joes who look plain old silly in such stuff.

) In other words, there seems to be a dearth of stuff that looks like something that your average, suburban, thirty- or forty-something guy would wear as a making-a-beer-run outfit.

So, this is my attempt to make a contribution to their sorry little cause, as it were.

These don't require a mesh, 'cuz they're fansee's magical reworks of a basegame Maxis mesh.

The files are all Compressorized so that they are as small in file size as they can be, which since it's clothes means that they're not excessively small, alas. I've named all the files so that you can tell what's what and therefore can easily get rid of what you don't like/want/need. I also included in the rar file a better-quality copy of the labeled collage pic above, to make color-weeding easier on you. Unfortunately, it bloated the size of the rar file by about half a meg, but these things can't be helped.

So, yay for happier man-pixels!

Because my man-pixels are always my favorites. Why? Because they are men who actually do my bidding, naturally!

Extra-special huge gigantic thanks to fanseelamb for making awesome menstuff and for being awesome about sharing... Further thanks: To Aquilegia, for default-replacing Maxis hair textures with different colors, since I'm decidedly NOT Maxis-match.

Honestly, I don't know whether or not Quinten's hair is affected by the replacements or not. I can't tell. But I KNOW that Pierce's hair is because that color isn't Maxis's idea of red, even though that's a Maxis hair.