by scumbumbo Posted 20th Dec 2014 at 10:34 PM - Updated 18th Nov 2017 at 12:09 AM by scumbumbo : Updated to Version 3 for Nov 15, 2017 game patch
February 06, 2020 - Scumbumbo has passed on but his work and memories are still being kept alive by many of those whose lives he has touched. To download fixes for his mods, please check <a href="https://scumbumbomods.com/">https://scumbumbomods.com/</a> and please direct any questions or concerns to his discord channel linked there. 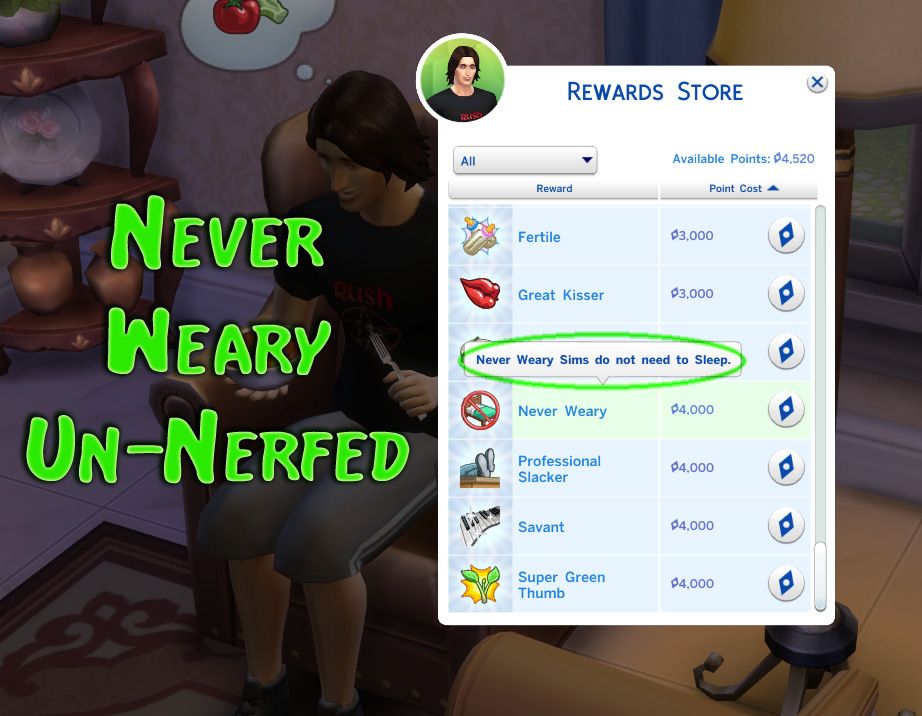 Older versions of the mod are no longer supported and have been removed.

EA decided in their wisdom to change the Never Weary trait with the December 16 patch because... well, no one really knows why they did it. Probably just to annoy me. I felt the trait was not only less useful, but just plain annoying as sims who had purchased it would now stay up the night and typically only start to get tired just as they needed to get to work.

This mod restores the original Never Weary trait to it's original effect, sims with the trait will never need to sleep. The original in-game trait description is also restored (English only, but translations are welcome).

This mod may cause conflicts with other mods which changes the Never Weary trait. Due to the wide variety of mods and sources for them, it is unlikely I will be able to help you with such a conflict. If there is a conflict, either one or both mods may fail to work properly.

Need more information?
Back to download view
61 Comments / Replies (Who?)