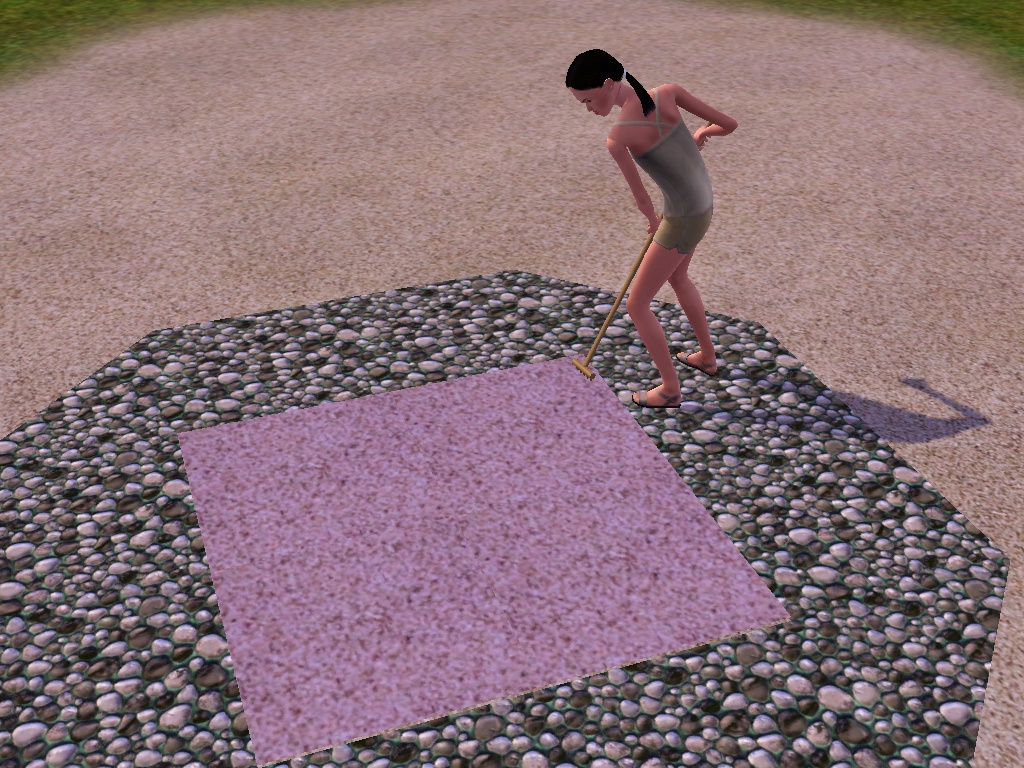 209 Thanks  Thanks     62 Favourited
Updates
25th January 2015:
- default cooldown is now 12 hours;
- the pattern choosing dialog now appears right after you select the interaction, not after routing to the garden;
- if you choose "Cancel" in the pattern choosing dialog, the current sand pattern is kept instead of using the plain one;
- fixed typo ("Verical"->"Vertical").

This is a scripted object, a "rug" that works as a zen garden.
There might be a few issues, but it should work fine.
It is rakable, composable and also patternable.

What you mean with rakable? Glad you asked. Clicking on it you'll get the "Rake..."
interaction that will bring the sim to the "rug" to start a raking animation with a wooden
rake as a custom prop. Raking will raise a little bit the fun motive of the sim. If user
directed, sims can rake whenever they want, but if they do that autonomously there's
a check that prevents them to rake all the time: it's a XML tunable cooldown, the default
value is 180 sim-minutes, 3 sim-hours. You can change that value with S3PE, the XML
resource for tuning it is the one called "Sims3.Gameplay.Objects.Arsil.ZenGarden".

How is that composable? To make a bigger zen garden, put some rugs adiacent to each
other to form a rectangle (don't overlap them even if it's possible to do that), like you do with
floor tiles, and all facing in the same direction. The last part is important for the next point.

Seriously? Patternable? Is that even a real word? Gee, you sure ask a lot of questions!
Patternable means that when you rake the garden you can choose which pattern draw in the
sand. This is only true for user directed interactions, autonomous interactions will not change
the pattern. For lack of a better definition/explanation, it works like a jigsaw puzzle.

Cool! Wait... your sand patterns/textures suck! FUUUU, I tried my best.
If someone wants to help me, check the Technical Info paragraph below.

Here's a AVI VIDEO that shows how it works.

You can find the zen garden "rug" in the Buy Catalog along with the other rugs.
It costs 99 simoleons. It is CASTable but the changes made to colours or pattern
will have no effect. That's a feature of course, it's not like I'm an incompetent
modder or something like that.

If the zen garden is outside and is covered by snow it should not be rakable.
WARNING: I'm concerned that this check could disable the interaction even
if the garden is indoors but outside the ground is covered by snow.
I don't have Seasons EP, so I can't test that, a confirmation would be nice
(after making sure you got the updated version of the mod).

Additional Credits:
All respective authors and contributors of the tools and tutorials for modding TS3.
MTS and all modders who made the game much more enjoyable.
JunJayMdM (for help with the jazz script) and velocitygrass (for the last but more
difficult piece of the puzzle to understand how to change a texture with the code).

See: Game Help:TS3 CC Basicswiki for a full guide!
Back to download view
15 Comments / Replies (Who?)