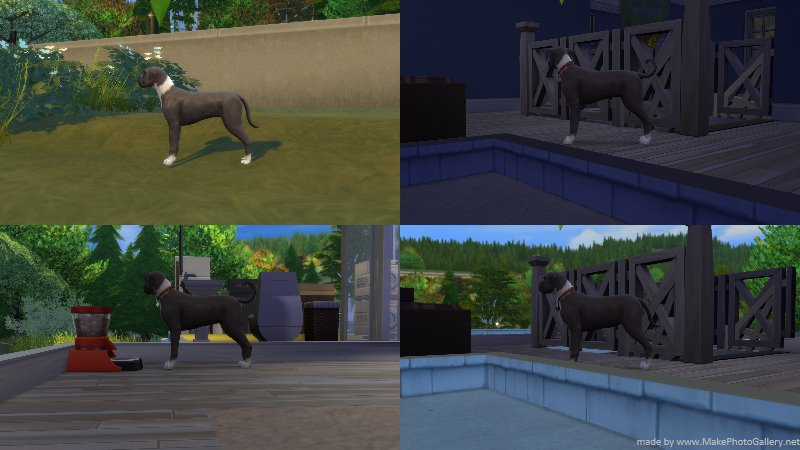 85 Thanks  Thanks     51 Favourited
Regarding Seasons Update

For those of you who aren't certain, I have tested and can confirm that this mod works with the seasons update.

The Sims 4: Cats and Dogs' pet pregnancy system is considerably more robust than in its predecessors, even distinguishing between cats and dogs. Despite this, no real attempt to actually simulate the symptoms of dog and cat pregnancy has been made. Being as I've read about what should be expected of a pregnant dog, I've decided to correct this for dogs. This mod tweaks and expands upon the XML tuning of dog pregnancy to attempt to encourage the sort of behaviors that might be seen in real life pregnant dogs. Early on, they will require more attention and may not eat as much, but as pregnancy progresses, their appetite will increase and they will spend more time alone.

Dog pregnancy can be broken down into 5 stages, which correspond to how distended the dog's belly is.


Stage One
This is when the pregnancy has not been revealed to the player yet. The dog will desire more attention than usual and will be less playful and hungry than usual.


Stage Two
The first trimester. The dog will be even less hungry than before, and will still desire above average attention, though not as much. They will rarely play now (this last one sticks for the remainder of pregnancy).

*Affection decay is accelerated by 1/2

*Hunger decay is cut in half


Stage Three
The second trimester. The dog will start to feel less comfortable than usual and have a harder time getting around. The dog will experience an increase in appetite as well as getting tired faster. They may also spend more time unloading.

*Bladder, Hunger, Energy and Bowel decay is accelerated by 1/2

*Dog may vomit during this stage


Stage Four
The third trimester. The dog's appetite will increase further as will energy loss. It also becomes harder to distract them from their discomfort and they will prefer to be alone. They will spend more time sitting and lying down as well.

*Affection decay is cut in half


Stage Five
Labor. The dog will be visibly uncomfortable, and spend a lot of time panting and pacing around the house. They will likely be very tired by the time birth happens.

*All other motives will pretty much stagnate

Simply place the package file in My Documents\Electronic Arts\The Sims 4\Mods and make sure mods are enabled in-game. I also recommend using this alongside a mod that makes pregnancy last longer, otherwise, the effects of this mod may not be very potent.

This mod will likely conflict with anything that touches the dog pregnancy object states and handler moodlets. Specifically:

Additional Credits:
Sims 4 Studio, which allowed me to open and edit the XMLs

Need more information?
Back to download view
10 Comments / Replies (Who?)