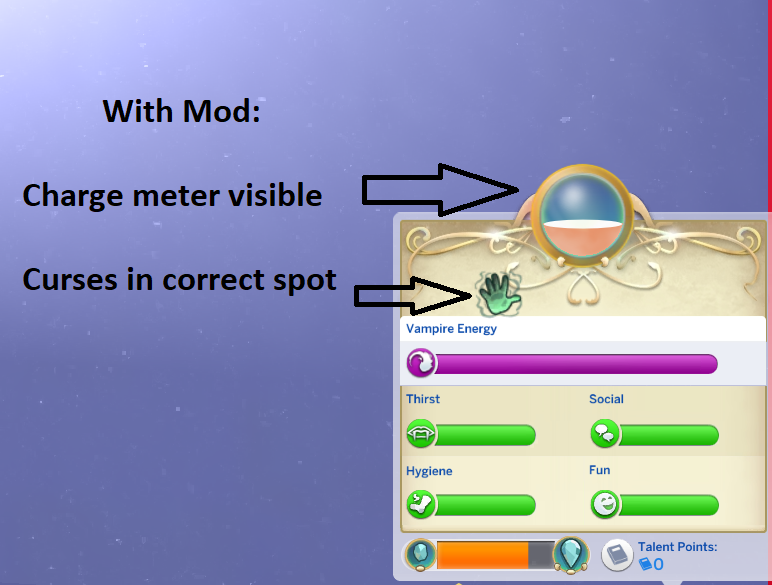 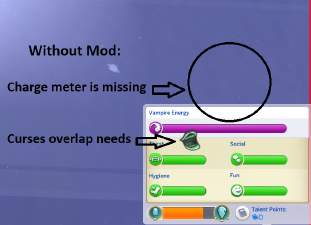 Important Install Information: This is a script mod. Place the .ts4script file directly in your mods folder.

A mod born out of the frustration of a simmer who was tired of having to keep a vigilant watch on his Vampire-Spellcaster sims who kept exploding to death from magical overcharge.

This mod overrides the function the game uses when determining which needs should be displayed in the needs panel, allowing all active needs a sim has to correctly display in the panel. This allows Vampire-Spellcaster hybrids to correctly have the spellcaster charge show up.

This mod was designed as a script so it would be compatible with any new needs added by mods or future Sims packs. As a warning, the game gives no indication of what will happen if it ever tried displaying multiple needs using the "Orb" display type that witches use. If EA adds a new occult type with a need using the same Orb display type (probably fairies), the mod might act unpredictably. Multiple "Long Bar" needs (like vampire power) "should' display properly.

You won't see any difference in the game unless you play sims with hybrid occult types or with custom needs added by mods.

As a pure script mod, it doesn't reference any pack-specific resources, so it should be compatible with even the base game. Although there isn't any point in using it without Vampires, Spellcasters, or any modded supernatural types.

As a pure script mod, it should be compatible with anything. The only exception would be other script mods which try to modify the needs display, but those mods don't exist or else I wouldn't have made this mod in the first place.
Because this mod completely overrides a specific function of the game, it is very likely to break if/when EA adds a new supernatural type with a completely new need/resource that uses a brand new type of display in the needs panel. This mod was designed to be as "future-proof" as possible in anticipation of such an event, so your needs panel "shouldn't" completely break while you wait for an update.

Completely overrides the script function: traits.trait_tracker.TraitTracker.sort_and_send_commidity_list
Only another script mod can override this, and I've never seen one that even touches that function (or else this wouldn't exist), so it should be compatible with your other mods.

Note: The motives panel can only display 6 "normal" motives at once.

Only 1 Orb display works. Any additional orb displays cause the the game to render it twice in the motive panel as overlapping normal and long bar motives.

Technical Details: How it works:


Normally, the game looks for the first trait it can find that specifies a sorting override (usually the Vampire trait), builds a sorted list with only those specified needs, and sends that list to the UI to be displayed in the panel. This means any additional needs a sim may have from other occult types or modded traits would never show up in the UI while the sim was a vampire.

The function has been modified to generate additional lists of all needs the sim has, separated by display type (normal bar, long bar, orb). The lists are then combined with the list of needs the game previously generated. Motives chosen by the sim's occult trait are prioritized to always show.