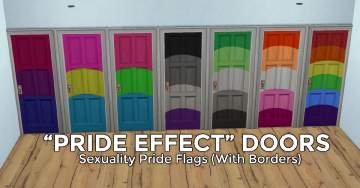 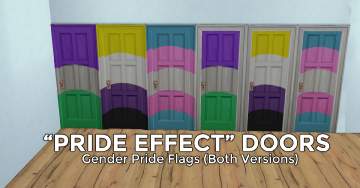 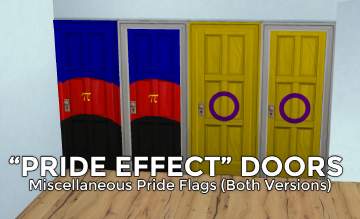 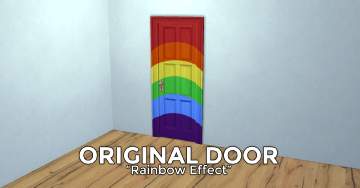 55 Thanks  Thanks     16 Favourited
This is a Maxis Recolour which means that it is a recolour of an item that already exists in your game. Please check the Expansion pack requirements to see which game pack it recolours.
Here with an upload no one asked for. Doors with pride flags on them! I made these for a specific build, but figured maybe someone else might have seen rainbow doors and thought of this. Now, here you have it "Pride Effect" doors. You can also just use these for whatever, of course, they can just be pretty rainbows if you like.

This is a standalone recolour of the "Rainbow Effect" doors, which were added to the base game at some point: I thought it might be fun to add some other variants for different flags. So I did two different versions of various different pride flags for sexuality and gender as well as polyamory and intersex as I had this family that had this really over the top and garish (but also I kind of loved it) apartment in the spice district.

Need more information?
Back to download view
4 Comments / Replies (Who?)