I wanted a really big house plant and I realized the Your Biggest Fan Palm tree fits perfectly into the amphora pottery. Since it's a tree, it does fade when you get close, but considering its size, that's more of a feature than a bug. That stand up flower arrangement does well in the same pot as well :D

in this pic the tv stand is 2 square stands, 1 rotated 90 degrees to create a star shape, and also the plant on the end table is one of the standing flower arrangements where the standing column is hidden by the end table, resulting in the top part look kind of like flowers in a bowl.

Ok it's been two weeks, so I hope this doesn't count as a double post but I was riding the inspiration train HARD last night as I remodeled the Flaming Dragon Hotel in Takemizu. Here's some things I did that I think were pretty nifty!

tried to emulate a hibachi-style eatery in the restaurant. I made the counter tops connect like usual and in the center I put two of the silver shiny tyme islands back to back, twice, to get this grill-looking surface, then I used some of the edging items to just fill in the gaps, so it makes it look like it has a small lip/edge/ I also put two stove exhausts back to back above the 'grill' area and hid a hanging lamp in it. I haven't play-tested this yet so it's possible it won't work and plates cannot be cleaned up in the live setting.

Also in the restaurant, I tried to emulate a built-in-the-wall-fish tank. I used the stage tool, put the fish tank on top, enclosed the two spaces on both sides with walls and then used support beams above it in roughly the same color (this trick was inspired by @Zarathustra's country club locker room, thanks!)

For the entry to the lobby I wanted a short of nature-esque statement piece, I combined multiple standing lamps on top of one of BB's nooks and niches garden circles, added a bunch of flowers and popped a tree in the middle.

It took me a few hours to remodel the whole thing but those aspects I think were the niftiess of designs. If anyone's interested the full remodel can be seen in this album
Uh oh! My social bar is low - that's why I posted today.
My SIMBLER | SIM WHIM | SIM VIDS | SIMS 2 STORIES | SIM PICTURE-TAKING TIPS | MY HOOD | SIMSTAGRAM
Zarathustra

I happened across this while searching for ideas on fancier modern bathrooms for an upscale hotel tower I've been working on. Definitely some inventive ideas for more luxurious bathrooms to be found here... not quite the same type of combining objects into something that looks like a new object that often seems to happen on this thread, but it's a good illustration of how mixing build and buy elements and wallpapers/tiles can give you some pretty dramatically different vibes in a room that (at least for me) often feels like an afterthought... (my favorite is the sink setup at the very start of the video)
Welcome to the Dark Side...
We lied about having cookies.
joandsarah77

@Zarathustra I've done all of those things. Curtains in front of the bathtub, the made-up shower and the bath up on a platform. I really like doing the bathtub platform in fancy bathrooms but most times there simply isn't the space. Years ago I saw a video on bedrooms with the beds up on a platform and curtains and I liked it so much I used in numerous of my lots here too. I wonder if its the same person?
"I dream of a better tomorrow, where chickens can cross the road and not be questioned about their motives." - Unknown
~Call me Jo~
Careers and businesses for sims
What I Love About Toddlers
Charmful

I'm a big fan of platform bathtubs when there's enough space to pull it off! I actually think the stage tool is so versatile and use it in a lot of stuff like above-ground planters, statue pedestals, and in the video example, it's a great tool in the bathroom to frame a sink. I also like using fences, windows, and long window-shades as partitions in bathrooms between the toilet and sink or to separate the shower area.
Uh oh! My social bar is low - that's why I posted today.
My SIMBLER | SIM WHIM | SIM VIDS | SIMS 2 STORIES | SIM PICTURE-TAKING TIPS | MY HOOD | SIMSTAGRAM
inspiredzone

Quote:
I did something similar in my own Flaming Dragon makeover with a U-shaped bar. I didn't make a grill for better playability/functionality. I considered an invisible recolor of the restaurant stovetop so I could place it in the middle, but could not find and creating it is beyond my abilities. I settled for using the fire jet instead for the aesthetic. 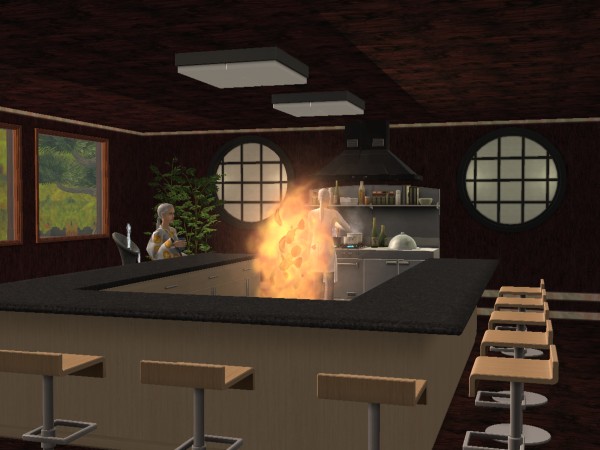 I was never a fan of the bathtub platforms. They take up a lot of space, and I think the stages are too high for them to look realistic and/or good. Maybe if the stage could use the half-height foundation (I don't use that, so I wouldn't know) and didn't require a staircase to get to it. I have some pretty large master bathrooms in my game, and I still don't think they're big enough to justify a platform. Maybe if I were building a palace, but not a realistic suburban home.

But, speaking of stupidly fancy bathrooms:

Sadly the pic was taken in winter, so the fountain is off, but in other seasons, it cascades into the tub. It's not seamless, since it bleeds through the wall to the shower, but it gives a cool effect during bubble baths. I built the house from a floorplan and the space for the master bathroom was super narrow, so I decided to be a little ridiculous. I love seeing what others are up to and have a few projects of my own involving fixing up and revamping a few of my oldest apartment zoned lot dating back to about the time M&G stuff was released and shortly after I bought it and installed it.
TadOlson's Blog
Charmful

That fire jet is inspired!! I may have to nick that tip for mine

Also if I find the grill is causing the restaurant unplayable I might set all of it on a walk through block so waiters can get to plates.
Uh oh! My social bar is low - that's why I posted today.
My SIMBLER | SIM WHIM | SIM VIDS | SIMS 2 STORIES | SIM PICTURE-TAKING TIPS | MY HOOD | SIMSTAGRAM
inspiredzone

I took the Functional Eloquence mirror and used snapobjectstogrid false to place the posters. Now I have framed posters that look uniform and professional in the lobby of my studio lot.

Not all the posters fit, and I only tested this mirror, but I'm sure other wall mirrors would work as well. You can see the thumbtacks when zoomed in, but I don't mind, and it saved me from having to download CC to get the look I wanted.

@inspriedzone -You've done a few great creations so far.
I started on another project working on a townhouse build and got as far as fencing off the edges of the upper levels of the terraces and installing the stairways even up to the rooftop which was also fenced in.It's the first of several more apartment lot build projects I've got planned and intend to work on.I need more apartment lot options and don't like using the EA builds because of the issues they come with.I might use one for design inspiration for a higher end build.
TadOlson's Blog
Charmful

@inspiredzone - I did end up using your tip about the fire jet and it looked amazing! The counters were all usable and wait staff could clean plates when I play tested it Also on my weeks-ago mass-remodeling of Takemizu I built an atrium into the Steaming Dragon Hotel and combined a tree into a fountain, added rocks, and with omsps, added in the various floating pond elemtns and one of the deco good luck frogs. Turned out pretty cool!

[QUOTE=Charmful]@inspiredzone - I did end up using your tip about the fire jet and it looked amazing! The counters were all usable and wait staff could clean plates when I play tested it

Everything here looks absolutely amazing! I love the fire jet and counter thing and the atrium, which is just gorgeous.
Back to top